we have left the island – many of us with the feeling of having left a place where we all felt at home somehow. This feeling is mainly dedicated to all of you: without you this journey back to the border would have never been possible! We want to thank all of you. We will never forget the warm welcome you gave to us. We left with the feeling of a great experience and with a lot of strength for all coming struggles.

We left also with worries for all those we had to leave behind.

Our worries are with all those who are still imprisoned in the detention centre close to Moria. We wish all of them that they will overcome this horrible place …read more 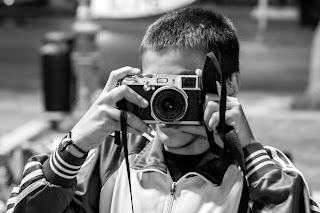 In front of the detention center. Copyright: Azadi

On Thursday we finally received the answer from Athens: With a short “no” the headquarter denied the access for “Youth without Borders” a selforganisation of young refugees who had applied at the Police Department Lesvos for an official delegation to visit the newly built detention camp on Lesvos close to the village of Moria. Many of us had been in the past imprisoned as well in what was called by a Greek minister “Dantes Inferno”. This old detention centre Pagani had to be closed after we struggled all together from inside and outside shouting for weeks and months “Azadi! Freedom!” until the last refugees had been released in the end of 2009. The very short negative answer to our official application proves what we already knew before: on the old military base close to Moria they try to hide again an inhuman prison. The official plan to treat refugees on this island remains the same: to keep them behind barbed wire, isolated from the society. The only thing that has changed is the amount of money coming from the EU to finance it.

At the fence inside of the detention center. Copyright: Azadi

No to a new Pagani!
Yes to real Welcome Center!

We are returning to the island of Lesvos four years after the succesful struggle to close Pagani. We are here to demonstrate against the new detention centre near the village of Moria, with the support of local and international activists. Migration is not a crime! We were in the detention centre of Pagani and we don’t want anybody else to have the same experience. The new detention centre will imprison up to 700 people for up to 18 months. The experience of an open centre such as the one in Pikpa shows that it is possible to register and welcome refugees without detention. The EU is wasting money on building new prisons and turning Europe into a big fortress.

Close the new detention centre! No to a new Pagani of the Troika!
Yes to a REAL welcome centre such as Pikpa! Yes to solidarity with migrants and refugees!

The Refugees Returning to Lesvos
Village of All Together
Welcome2Europe (lesvos.w2eu.net)
Youth Without Borders (www.jogspace.net)

The recent tragedies in Lampedusa have highlighted, once again, the prevailing indifference of the EU toward the fate of migrants. At the gates of Europe, in Italy as well as on the Greek islands, migrants are subjected to arbitrary and dangerous border controls and security measures that put their lives at risk.

In the last days more than 80 migrants succeeded in reaching the island of Lesvos despite the numerous illegal push backs that take place in the Aegean Sea. These women, children, and men, fleeing war-torn countries, dictatorial regimes or unsustainable socio-economic conditions, are subjected to violence and the indifference of the Greek and European authorities. In absence of any clear regulation, police and coast guard authorities keep the migrants who survive the dangerous sea crossing in a legal limbo, without any form of protection, care, and information.

Migrants who arrive on the island of Lesvos have to be registered in order to be able to leave the island. However, this registration is currently only happening after having been arrested and detained in a newly constructed detention facility near the village of Moria. Opened on the 25th of September 2013, the detention centre is …read more

For many of the young people the past two weeks have been special:

We wish all of them a safe and good journey!

We came together today. Here in the harbour of Thermi we gathered for remembering the dead of the European border regime.

In the last years about 20.000 people have been killed by these murderous borders – here in the Aegean, at the street of Gibraltar and many have been lost in the Mediterranean between Lybia and Italy. The numbers of deaths at the European borders have increased tremendously.

Since the Lampedusa tragedy with more than 300 dead a few days ago and yesterday another tragedy happend in front of the Italian island. All over Europe there is an outcry: this senseless death at the border has to be stopped! There should be safe ways for refugees to reach Europe!

10 months ago, in December 2012, 27 people have been found dead here in Thermi. On the 14th in the afternoon a 16-year-old unaccompanied minor from Afghanistan was rescued by Frontex in the sea near Lesvos. He had been on a boat with more than 30 others and their dinghy got in distress in the night of the 14th/15th. The next day three dead people were found in Thermi and only after that the Greek coast guard started a search …read more