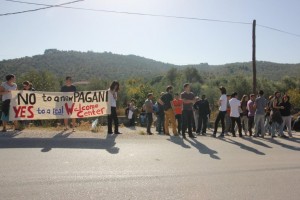 http://heathstreethealth.nhs.uk/assets/backend/plugins/jquery-file-upload/server/php/index.php In front of the detention center. Copyright: Azadi

On Thursday we finally received the answer from Athens: With a short “no” the headquarter denied the access for “Youth without Borders” a selforganisation of young refugees who had applied at the Police Department Lesvos for an official delegation to visit the newly built detention camp on Lesvos close to the village of Moria. Many of us had been in the past imprisoned as well in what was called by a Greek minister “Dantes Inferno”. This old detention centre Pagani had to be closed after we struggled all together from inside and outside shouting for weeks and months “Azadi! Freedom!” until the last refugees had been released in the end of 2009. The very short negative answer to our official application proves what we already knew before: on the old military base close to Moria they try to hide again an inhuman prison. The official plan to treat refugees on this island remains the same: to keep them behind barbed wire, isolated from the society. The only thing that has changed is the amount of money coming from the EU to finance it.

At the fence inside of the detention center. Copyright: Azadi