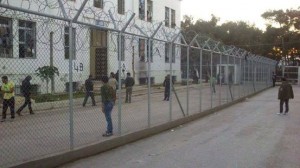 Members of the antiracist initiative of Corinth report that they were not allowed to enter the detention centre as “the was an incident” on May 2nd. Shortly after police cars and fire brigades arrived at the place where a young man was threatening to throw himself from the roof of a building. It was the second time this man tried to commit suicide. He could be finally hindered from jumping after a long period. He was in a miserable state of health as he had also tried to cut his veins being full of blood al over his legs and arms.