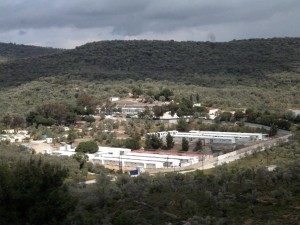 Sotouboua ‘First reception’ practices of refugees in Greece: The example of Moria on Lesvos island

“We didn’t come to Europe to get beaten, insulted and imprisoned.”

In September 26th, 2013 the new so called “first reception center (KEPY)” opened in Moria on the island of Lesvos. It is the second of its kind in Greece following the example of the KEPY in Fylakio, Evros that opened earlier in the same year.
The Pagani of the Troika – as it is called to remind of former prisons and to disconnect it from nearby Moria village, is a prison where only a few selected NGOs have access under the precondition not to share any information with the outside world. Civil society gets presented the term ‘first reception’ that gives a false impression of an open, accessible place while it is nothing else than another new prison in the tradition of Amigdaleza’s fenced containers the only difference being the detention duration – at first sight. As prescribed by law, detention does not exceed 25 days maximum in this place BUT detainees might just be transferred to (pre-removal) detention centers such as Fylakio, Komotini, Xanthi or Chios for example, where they might stay up to 18 months or …read more