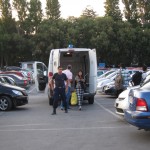 Wednesday, 6th August 2014, first day at the harbour of Mitilini:

When I started telling the people my own story, that I came here via Greece and have been very long here and than made it out – it changed our relation immediately. I had all the memories from the past – it was exactly this harbour and it was exactly this place of my arrival. But the difference was: when I arrived here, nobody was there to explain anything to me or to say welcome. 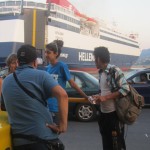 We are now here in Mitilini on our second journey back to the border. In a group of activists from various countries – with many of us having come to Europe via the Greek islands – we decided to go daily to the harbour to meet with people who were released from the refugee-prison in Moria and sought to leave for Athens. On the first day we met 24 people, all of them Afghan refugees. After their arrival on the island by boat they had become imprisoned in Moria. They were brought by a police-van to the harbour directly from the prison. Most of them had been imprisoned for about …read more