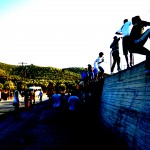 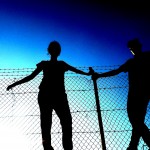 In the frame of the second “back-to-the-border”-camp from youth without borders and the network welcome to europe a protest took place at August 10th 2014 in front of the detention center in Moria on Lesvos island.
About 80 people, mainly young refugees and migrants, organized a concert by Renovatio, Open Mike and a DJ in front of the so called “first reception center”.