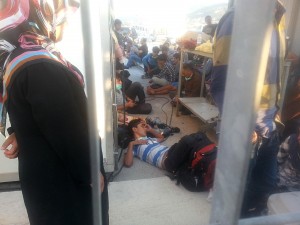 LESVOS: Unaccompanied minors kept in detention for days and transferred to detention in Amigdaleza with plastic handcuffs

On Tuesday 19th of August 2014 we became witnesses when the police transferred 36 unaccompanied minors from Moria “first reception” detention centre in Mytilene, Lesvos Island to the port and on the ferry heading to Athens as some of us were travelling the same day. The children and teenagers – some of which are merely older than 13 years – were handcuffed (with plastic wire straps) and guarded by dozens of uniformed officers and civil police. On the first sight we thought that we would be travelling with penal detainees being transferred to Chios prison. Only on the second sight we recognized minors we had met a few days ago in PIKPA and then again in Moria during our days of action on the island. They were not even allowed to take of the handcuffs when going to the toilette!

temporary detention in the port of Mytilene upon arrival / August 2014 / copyright: w2eu

Unaccompanied children upon arrival to Greece are afraid to say the truth about their age. They are so afraid to suffer more days in detention that they often declare themselves …read more