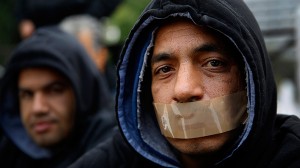 In a bid for better living conditions, temporary working permits and medical care, more than 200 Syrians – among them many families with small children – fleeing the war-torn country and seeking asylum in the EU, have begun a hunger strike in Athens’ main square. Protesters began to gather on Syntagma Square on November 19, camping out and sleeping on cardboard boxes and in sleeping bags before staging the hunger strike on Monday. Dozens of Syrians are living homeless in the streets of Athens and Thessaloniki without any support. The demonstrators, many of who sat with masking tape covering their mouths, called for the Greek government find a way to solve the refugee crisis. Read their declaration:

We are the Syrian refugees who are standing from 19 November 2014 outside of Greek Parliament in Athens at Syntagma square.
We started hunger strike on 24 of November.
We demand full asylum rights as refugees.
We escaped from death in Syria. We escaped from death passing the Aegean sea. We want …read more