By palme43 (deutsch unten) We are looking for people that in the next days also can take part to build a longer time the new roof of the building. Also today on Sunday, or in the next days.May be one or two whole days, from about 10 … Continue reading → …read more

By palme43 Saturday 13.12.2014 at 2pm we are holding a commemomeration march for our beloved Sista Mimi who passed away on Wednesday 10th December, 2014. It is as well the date of the International Human Rights Day. The march will start at … Continue reading → …read more

By refugeeresistance Hey! The group refugee Schulstreik Berlin organized this rally for Friday. I don´t know if it would be fine to publish it on oplatz.net, what do you think? If yes, I can publish it too. Versions en english and french … Continue reading → …read more

By refugeeresistance hi all, herkulesstraße is the address of one of the biggest refugee dorms in köln/cologne, germany (around 700 people living there, many in containers), where about a month ago a huge police raid took place (600 pigs). they came at … Continue reading → …read more

More than 3,400 people have died in the Mediterranean this year trying to reach Europe, the UN refugee agency said Wednesday, urging governments to take more action to save lives.

More than 207,000 people have made the risky sea crossing since January, almost three times the previous high of 70,000 during the Libyan civil war in 2011, the UNHCR said.

Of these, a record 3,419 died, out of a total of 4,272 reported deaths worldwide on migrant vessels this year.

Most set off from Libya bound for Italy and Malta, looking for work or, increasingly, asylum — the numbers include 60,051 Syrians and 34,561 Eritreans.

The figures were released at the start of a two-day meeting in Geneva hosted by UN High Commissioner for Refugees Antonio Guterres on how to protect people who take to the sea to escape persecution, war, instability and poverty.

Ahead of the talks involving governments, UN agencies and NGOs, Guterres warned that many states seem increasingly preoccupied with securing their own borders rather than preventing the loss of life.

Without naming specific countries, he said: “This is a mistake, and precisely the wrong reaction for an era in which record numbers of people are fleeing wars.

By refugeeresistance since morning around 10-20 police cars massively controlling ohlauer school. They say it is an inspection of “escape ways” and fire protection. They didn’t announce it beforehand to the inhabitants about such a control in their private living space. until … Continue reading → …read more

By oplatz Hello everybody, we want to start with a new Infopoint for Ohlauer School (GHS). For this we need a room – we think about 3 days in the week for 3 or 4 hours. It should be close to the … Continue reading → …read more

It was ten years ago, that Oury Jalloh burnt to death in a police cell in Dessau.

Ten years after his death his friends will come to Dessau again to demonstrate and shout out “Oury Jalloh – that was murder!” into the faces of those who didn’t want to hear it for the past ten years. 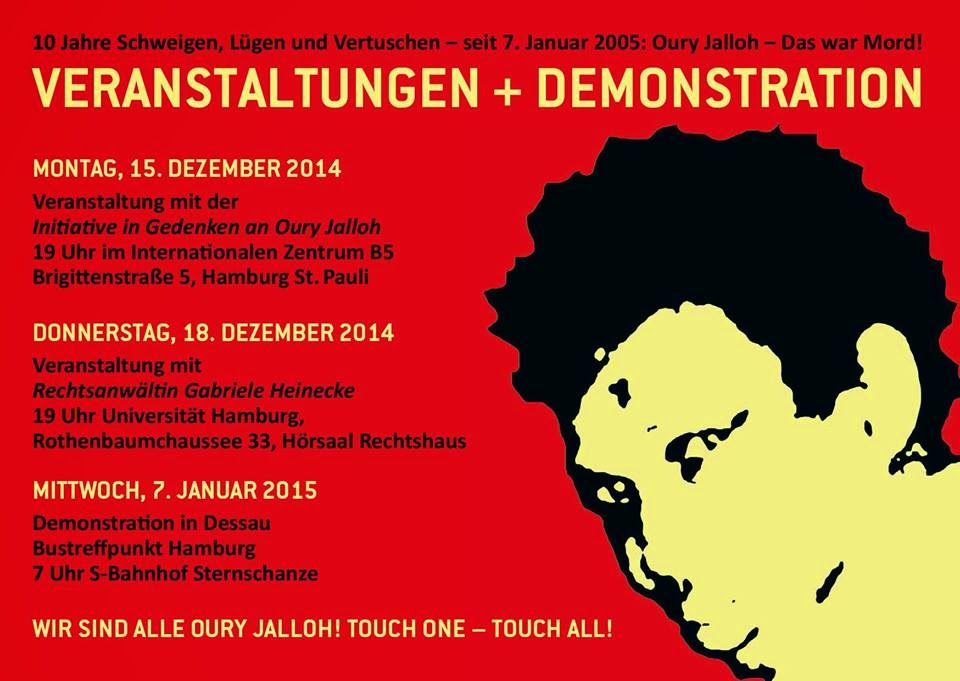