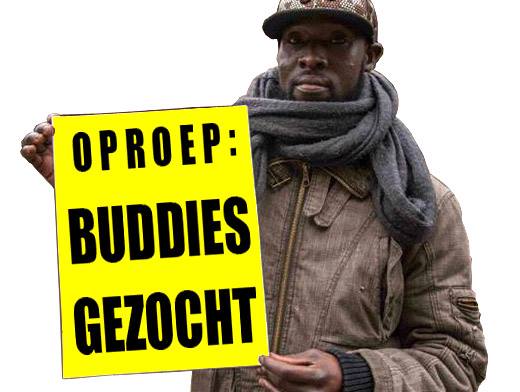 Mohamed Kamara from Guinea, 21-years old, is one more refugee who died in Police custody, due to lack of health care. He came to Greece in 2012. He attempted to leave through Patras port but was arrested and imprisoned for eight months in Corinth detention center.

According to his friends he applied for asylum but was given a negative answer in mid January 2015. After that he was arrested again on February 7 and on February 9 he was transferred to Kifissia Police Station in Athens. There he kept complaining about his health. Finally, on February 20, he was move in a comatose state to a hospital where he died. According to information he had been in almost comatose state for 24 hours before he was transfered to a hospital!

By oplatz On February, 20th 2015, the residents of the school received a letter, dated February, 13 in which they are requested to leave the building until March, 19th 2015. The letter threatens with forced eviction in case they do not comply … Continue reading → …read more

As long as deportation is still functionable for state and being cultural perform, believing in saftyness is unavailable.

Roma Communities are most Isolated group of Refugees in lager in Germany.
They are facing discrimination, isolation, criminalization and deportation daily by government and constitutions.

By freedomnotfrontex Today political activist, writer and journalist Turgay Ulu who fled Turkey 2011 was in front of the court in his ask for political asylum in ‪#‎Germany‬. Until now and despite the decision of the European Court of Human Rights ‪#‎ECHR‬ … Continue reading → …read more

By gepaecktragarz Press Conference for the Campaign and Demonstration Wednesday, 18.03.2015 at 11:00am – Studio Я of the Maxim Gorki Theater The campaign My Right Is Your Right! invites you on Saturday, 21.03.2015 at 1:00 pm to a large demonstration at … Continue reading → …read more

The European Commission against Racism and Intolerance (ECRI) today published its fifth report on Greece analysing new developments and outstanding issues, and providing recommendations to the authorities.

The European Commission against Racism and Intolerance (ECRI) today published its fifth report on Greece analysing new developments and outstanding issues, and providing recommendations to the authorities.

On Saturday, February 21 there were classes with riot police, as some 250 demonstrators managed to get for a while inside Amygdaleza detention center. There are demonstrations scheduled for next Saturday at immigrants’ detention centers at Xanthi, Hellinikon etc.

Photo from yesterday’s demo in Thessaloniki:

Another demo will take place tomorrow outside Amygdaleza and next Saturday outside Xanthi detention center (poster):

http://keepinsurance.com/tag/dental-practice-insurance-dutchess-county/ The following was written on December 2013 generic Misoprostol from india : “ buy gabapentin online cheap Police stations throughout the country have turned into ‘warehouses for human souls’, the conditions have been described as tragic, and as violating both international rules and Greek laws. The E.U. has always offered help, but the Greek State has not been willing to fully exploit it. Now the country needs to make the most of the 230 million Euros the E.U. is offering. It would be ‘desirable’ that this money be used to create modern hosting facilities, with distinctive places for criminals and the undocumented, regular access to a courtyard, natural lighting, proper food and regular medical checks. In a nowadays unacceptable status, health and safety regulations are not respected, and we often have unacceptable and arbitrary police behavior. This is exactly what is expected to happen when the State itself stacks human souls for a long time in inappropriate places, without any interest to satisfy the minimum human needs“. Is this part of the proposals on the “issue of immigration” of a progressive Greek political party? No, the above words were spoken on December 12, 2013, by the President of the Panhellenic Federation of Police Officers in the 12th National Roundtable Against …read more

By consensusdecisionmaking 01.02. black renault driving by a person on a bike. front passenger opens the window and dumps water over the cyclist. 08.02. fascists in Blue peugot shout “i will fuck you” and other insults and throw stuff out of the window to intimidate a group of syrians staying in front of the church 09.02. group […] …read more 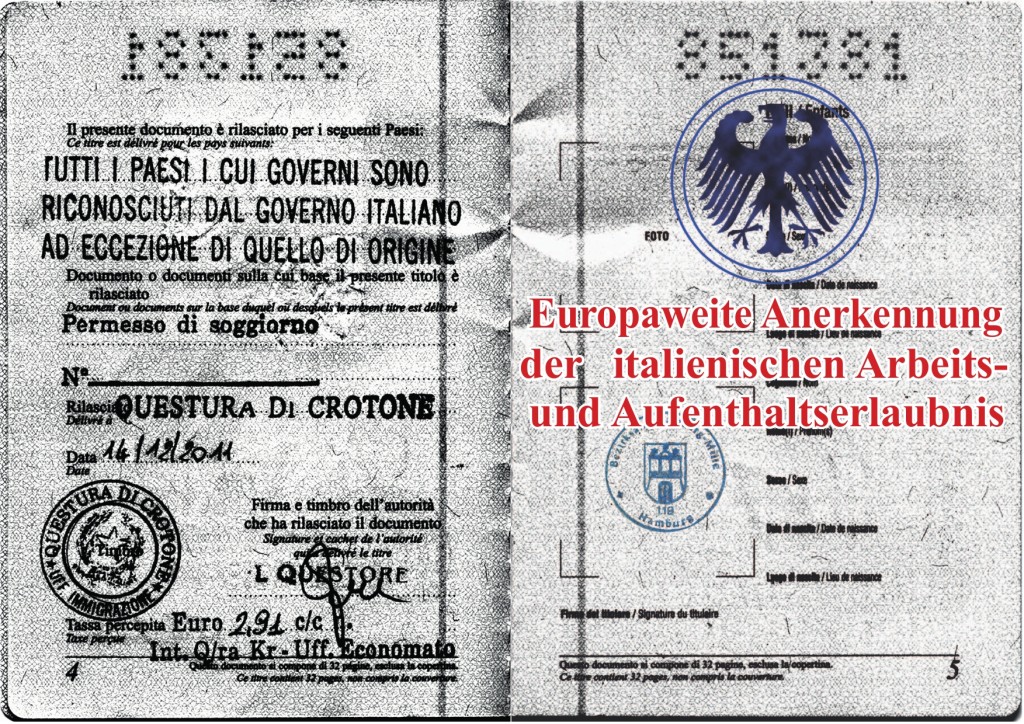 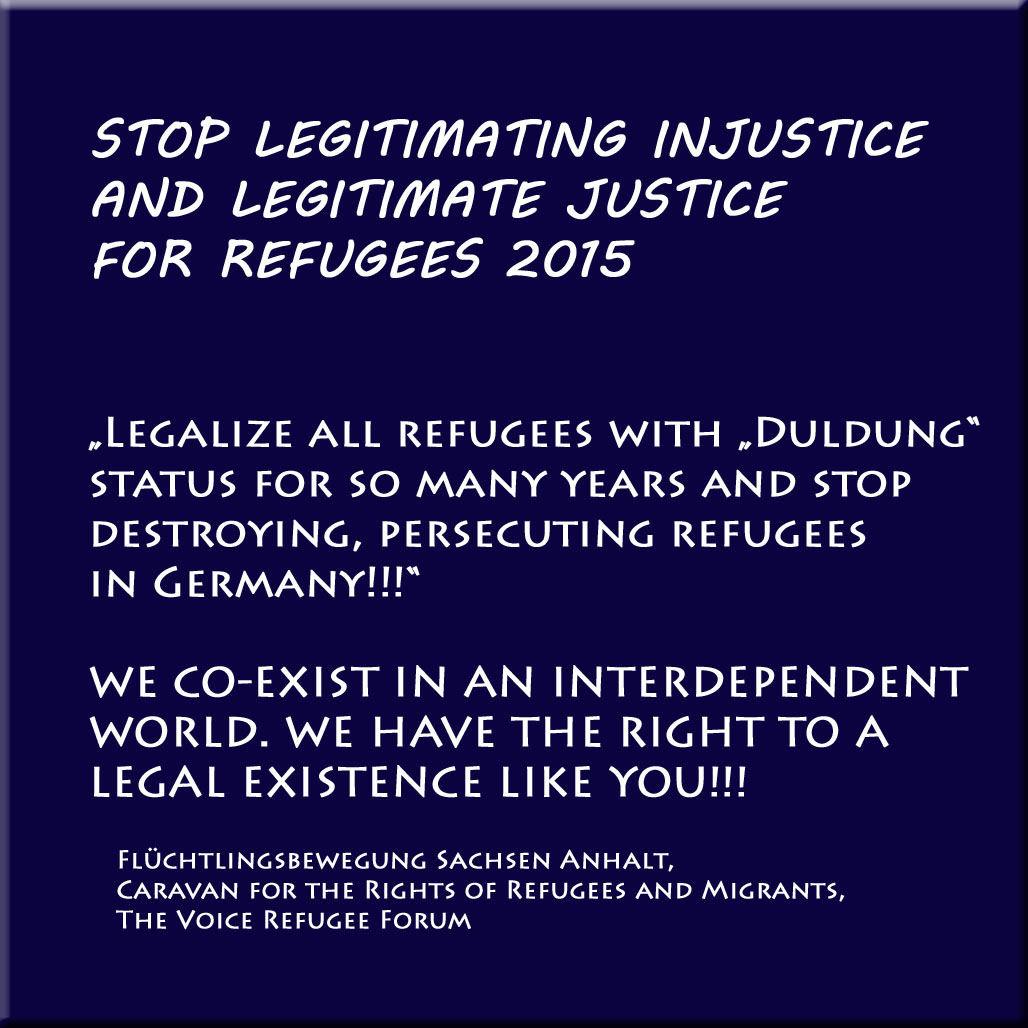 We refugees from Sachsen Anhalt are going to hold a preparatory meeting concerning our initiated campaign and action.
This meeting will hold in Vockerode on 26.02.2015 at arround 12 Hours.

By freedomnotfrontex Insel 36 (Island 36) is a documentary by Aslı Özarslan about refugee protests in Berlin. For more than one year asylum seekers lived in tents on Oranienplatz to take a stand against isolation enforced upon them by german laws. Among … Continue reading → …read more

By freedomnotfrontex The My Right is Your Right alliance has started it’s web page. Click on the emblem at the left to have a look. Refugees, various cultural institutions, legal professionists, engaged citizens and others have formed this alliance to campaign for … Continue reading → …read more

A demonstration has all ready taken place outside Amygdaleza on Sunday 15th, another one is organized today (Tuesday 17th) in the city of Patras and there is one scheduled for Thursday 19th in Thessaloniki. Οn Saturday the 14th, in Thessaloniki, around midnight, 250 people marched towards the central police station and threw red paint-bombs to the entrance.

Alternate Civil Protection Minister Yiannis Panousis said on Monday that the Radical Left Coalition (SYRIZA) government is closing the controversial migrant detention center at Amygdalezi in about 100 days. The statement was made following a meeting between mr. Panousis and Alternate Migrant Policy Minister Tasia Christodoulopoulou.

The government is planning to speed up the opening of three new hospitality centers in the Attica region so that migrants can be hosted in humane living conditions soon, especially after the suicide of a 28-year-old Pakistani inmate of Amygdaleza who prefered death to the conditions at the camp. Panousis said that the new centers will operate as “probation” homes. A committee will examine the files of those held at Amygdaleza to determine whether they are unaccompanied minors, sick people, asylum seekers or other categories in order to determine where to place them.

Panousis said that Amygdaleza would not be turned into an open hospitality center because it also houses the Police Academy. Clearer plans for the future of Amygdaleza and Greek migration policy is to be announced on Tuesday by the Ministry of Interior.

Nothing was mentioned about the other detention centers, spread throughout Greece.

Rally and Memorial for Shambu Lama, who was driven to death on 1st of March in 2011 by the Ausländerbehörde in Gifhorn
Saturday, Feb. 28, 2015. Staring time 2 pm at Steinweg 57 (Ceka-Brunnen), Gifhorn (Lower Saxony)

More from witnesses of war on: Zeugen des Krieges

JERRY BAGAZA REFUGEE ACTIVIST IN WOLFBURG:
I am calling for public observation and support. Come and witness my court hearing which is me against Ausländerbehörde since they have refused my right to be protected.
The court hearing will take place in Braunschweig on Friday, 20th of February at 9:30 a.m. in Verwaltungsgericht, Braunschweig, Wilhelmstraße 55, 38100 Braunschweig.
Thanks for your support!
Your presence is your solidarity for Bleiberecht for all!

Hello brothers and sisters,
i’m calling for memory of our late refugee brother Shambu Lama who was driven to death by the authority of Gifhorn. The memory will take place on 28th of February 2015, 2 pm at CEKA-Brunnen City Center/Gifhorn.
Your presence is solidarity with the fight for changes and for stopping discrimination and isolation of refugees in this state.