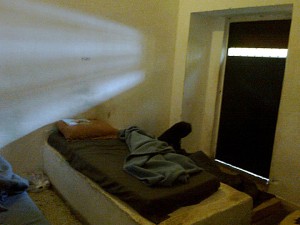 On Thursday 19, 2014 about 17 unaccompanied minors started a hunger strike in Lithi police station near Thessaloniki. Most of them were only recently released after months of detention. They had been in pre-removal centres such as Corinth, Amygdaleza or Paranesti Drama while waiting to be assessed as underage and / or awaiting their transfer to one of the scarce accommodation places for minors in open reception centres. Some of the minors detained in Lithi have been already more than six months detained. They have been arrested as they left the reception centers hosting them and were reported missing thereafter. The so called “protective detention” is supposed to be the better alternative than leaving them on the streets. This kind of “protection” is not wanted by any of them.

Currently only around 350 places are available in 12 reception centres all over Greece while there are nearly 200 registered unaccompanied minors waiting in detention for a place in order to get released. The new government has announced to focus on the creation of reception centers and the release of vulnerable groups like unaccompanied minors from detention.
The minors held in Lithi demand their immediate freedom.
Minors should receive special protection and not long …read more