ROME—Survivors of the wreck of a migrant boat headed to Italy from Libya said that as many as 400 people had died in the wreck, according to Save the Children and the International Organization for Migration.

According to some among the 150 survivors from that boat, who were interviewed by migrant assistance groups including the IOM and Save the Children, the wreck happened in the past few days, 24 hours after the boat left the Libyan coast, and involved migrants coming from sub-Saharan Africa. “Many young men, probably minor,” were among the victims, Save the Children said, citing the refugees.

Save the Children and the IOM said they weren’t able to pinpoint the exact day of the shipwreck.

That death toll from that vessel would mark one of the largest losses of migrants’ lives at sea yet, bringing the number of people who have died attempting to cross the Mediterranean so far this year to a new record.

Before the latest wreck, there had been more than 500 deaths since January of migrants seeking to come to Italy from the African coast, up from 47 in the same period of 2014, according to IOM figures.

The incident happened in the part of the detention center where minors are held. A minor refugee initially attempted to commit suicide by cutting his wrists and then set fire to the prison chamber, which was completely destroyed.

We, the Union of Kurdish students in Syria and Germany (UKSSD), condemn the cowardly assault on our friend and comrade. In the eastern part of Leipzig (Reudnitz), a Syrian-Kurdish student was shot with an unknown weapon between 10:30 and 11 pm.

By consensusdecisionmaking Neighbours on the east side of the new migrant jungle located near the Jules Ferry Day Centre have paid a contracter to dump large amounts of earth along the encampment. The intention of the erected embankment seems to be to block the view of the jungle from the neighbours large county farmhouse and to stop […] …read more

By oplatz Now you can order online the Movement Magazine with the history of oranien platz, refugee movement in berlin and more. The website for the magazine is: Movementmagazine.de Tagged: Ohlauer, Oplatz, Refugee, School …read more

In early March 2015, the mayor of Lesvos Spiros Galinos called on the ‘Village of all together’ to move out all the refugees accommodated in PIKPA. He wanted to renovate PIKPA for a tennis tournament that would take place in May. He seriously proposed the prison of Moria as an alternative that could be turned into an open centre. This is where the refugees could live!

The ‘Village of all together’ responded by saying that a prison would not be an alternative option, even if the fences were to be removed. They demand to be offered a different place, otherwise they would be forced to remain in PIKPA.

Us from w2eu and as part of the ‘Village of all together’ outside of Mytilene want to contribute to the discussion by offering a little story from PIKPA as well as comments from people who made PIKPA their home for some time.

PIKPA was an empty and run-down former holiday camp for children, located near the airport of Mytilene. Since November 2012, in accordance with the mayor at the time, it could be used by the group ‘Village of all together’. The story of this unique and self-organised …read more

Refugee’s manifestation in Lutherstadt Wittenberg on 16.04.2015: With Refugees as Guest Speakers from Schwäebish Gmünd

By oplatz Join the week of action against the restriction of the residence law between the 10th and the 18th of April! The change in law can lead to imprisonment of an increased number of refugees in detention centers and interdictions of … Continue reading → …read more

By oplatz The woman who was recently kicked out from the school in Ohlauerstr., needs from tomorow new soli accomodation. If someone is able to offer her a place to stay, please let us know. Info Point telefon OPlatz: 0176/ 3732 5499 … Continue reading → …read more

By freedomnotfrontex Mumia Abu-Jamal is a former Black Panther Party spokesman, a supporter of the MOVE organization and an award-winning journalist known internationally as “the voice of the voiceless.” In Germany he was voted an honorary member of the journalists union IG … Continue reading → …read more

By palme43 deutsch unten – francais en bas After the extension of the list contained within the so-called “regulation of safe countries of origin” in autumn 2014, another aggravation of the residence act is being planned now, which has the potential to … Continue reading → …read more

By consensusdecisionmaking It seems that the cops are trying to make their presence felt in the new jungle. Running above and alongside it, the highway gives a good vantage point for the police to look in on the new jungle. So far there have been many visits from police, just sitting there and spying in from the […] …read more

By the Autonomous Balkan Informbureau / April 2015

Declaration of the hunger-striking migrants Mataró 1

While in Greece the final phase of the hunger strike of left-wing revolutionary (17 November), anarchist (Revolutionary Struggle and Network of Imprisoned Fighters), and nihilist (Conspiracy of the Fire Cells) prisoners is ongoing2, getting a lot of attention in Germany especially from fans of the fire cells, another important struggle goes unnoticed in mainstream as well as movement media. On 23 March 23 migrants incarcerated in the camp3 of Paranesti near Drama in Northern Greece went on hunger strike. Their demands are: closing down of the camp of Paranesti, release and papers. Their hunger strike continues to this day (as of 04.04.2015) and represents thus the hitherto …read more

You will get to know this country for real only if you don’t get drown somewhere in Aegean or if you manage somehow to cross the fence in Evros. From the detention centers in Amygdaleza; Korinthos; Paranesti to Patision; Amerikis sq.; Acharnon, the daily life for all those who have the wrong color or the wrong papers is suffocating. Or to put it better; unbearable.

In the center of the city you feel like you cant do anything. Without papers it s impossible for you to work. But even when you do find a job that would be “black”; without insurance. And the boss would do whatever s/he wants and you would be forced to go through that otherwise s/he would call the cops. Without papers you can’t move as you please, visit your family and your friends. Without papers, when you get sick, you are not …read more

On Saturday April 4 2015, a solidarity action took place outside Paranesti detention center where a hunger strike is on since March 23. The inmates and the people in solidarity exchanged notes via soccer balls.

Hello everybody,
I am on behalf of other prisoner in pranesti Drama Camp express our deep appreciation to the people who came to pranesti Camp and start demonstration and describe their supporting to us today afternoon at 4/4/2015. I can dare say that with the supporting of you people we can continue our strikes against imprisonment or detention . as a young teenager I cannot tolerate being in jail for this long time. we want the supporting of you and our demand is to be free . and as human being this is the right of each persons to freely live in every community. once again thanks alot for your supporting . we are with you and we hope that you send our demand to the high ranking officials . about closing of the Pranesti Drama Camp as soon as possible. because we have lots of problems here in the Camp like: food , health and other facility .

At least seven people have drowned after a boat carrying sans-papiers migrants to the Greek islands sank in the Aegean Sea on Monday, Turkish officials said.

The migrant boat was heading to Greece’s Kos Island when it capsized off the Datca Gulf in Mugla.

According to initial reports, there were around 20 people on board. 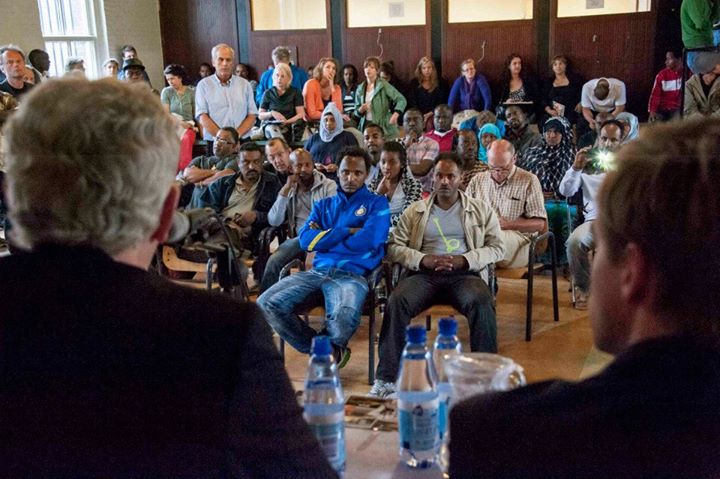 By gepaecktragarz We meet on monday 6th of april together with refugee activists from Dresden discuss and organize the bus tour. 12 o´clock in the refugee office , Waldemarstraße 46 The bus-tour takes probably place from 18th of april – 11th of … Continue reading → …read more