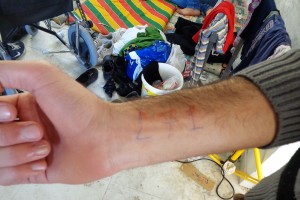 In the night of the 12.05.2015 a refugee boat by the name of “M/S Sula” carrying 192 refugees got in distress near Palaiochora, Crete. The mainly Syrian passengers were saved and brought to a closed gym. According to testimonies of refugees the police authorities wrote registration numbers on their arms while they were sleeping. Representatives of local NGOs explained, this was a common practice during massive arrivals on the island.

registration numbers marked on the arms of the refugees

It’s the second arrival of a refugee boat in Crete within one month. The “M/S Sula” had reportedly started in Antalya, Turkey and was heading towards Italy when the bad weather conditions forced the refugees to send SOS to Greek authorities. Most of the passengers were Syrian protection seekers while there were also some Palestinians. There were also 70 children among them as well as five unaccompanied minors. All refugees were first brought to a closed gym. The minors were then transferred the next day to detention in the police station of Souda/Chania awaiting a free place in a reception center for minors. UNHCR and IOM representatives visited them the first day of arrival. On May 14, 2015 most of the newcomers were …read more