Saturday, the 13th of June, will be a day of mobilization of migrants in Italy and in Germany, with demonstrations in Bologna, Bari, Brescia and Frankfurt.

Migrants, together with precarious and industry workers, will say laud and clear that they are not going to be the ones who pay the most violent backlashes of the crisis. While migration enters the public debate as a steady “emergency», only when the massacres in the Mediterranean keep happening, a true and daily war against migrants is fought on the internal and external borders of Europe. The division between economic migrants and refugees, as well as the new measures to face the arrivals from the Mediterranean, are just other tools to create hierarchies and to reinforce the widespread belief that migrants are something to be “managed» and “relocated», to be “used», while they become an unwelcome “burden» when they are not needed anymore. Migrants are supposed to pay double, with the risk of losing the residence permit, the general lowering of wages, the precarity of the working conditions, the high rents, the cuts in welfare, the inattention of the local administrations. Something that is not anymore difficult to understand for all those EU citizens that …read more 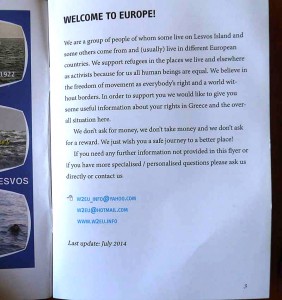 The local news blog with its article is criminalising the information provision. Access to information is a basic right and in this frame its provision is an act of solidarity and should be common sense of equal treatment of all human beings. The news blog falsely stated that Turkish human traffickers were producing the leaflet and handing it to the most paying as extra service. The article is obviously based on a great lack of knowledge on the English language, is not investigated journalistically and highly unprofessional in its perspective and intention. As a matter of course usually it is the provision with wrong information which is part of the tactics applied by human trafficking networks and not the provision of reliable and detailed iformation on their rights, as included in the mentioned leaflet. …read more

By freedomnotfrontex Despite repeated commitments by governments around the world to ensure women’s equality by repealing discriminatory laws, sex discrimination persists, including in citizenship and nationality1 laws. This is damaging to the lives of women and their families. Although there has been … Continue reading → …read more

By freedomnotfrontex By Soraya L. Chemaly No one wants to go to war. Before we commit soldiers and societies to inevitable sacrifice and atrocities, we try to balance the inevitable harm against the potential good. We seek to make the wars we undertake … Continue reading → …read more

By palme43 Call for Action at the Norwegian embassy in Berlin on June 16th Norway collaborates with the Sudanese Dictator Omar Al Bashir to enable him to kill and torture members of the oppositional groups: About one month ago Oslo hosted delegates … Continue reading → …read more

By solidarity against repression Finally, there is a translated version of the booklet “Im Park beginnt alles” The “Schlepperei” trial 2014 – A trial on §114 FPG which received special attention A collection of articles Content * Introduction * Chronology of Events * A Letter from Prison * An Overview of What Has Happened During the Court Sessions from […] …read more

By solidarity against repression Finally, there is a translated version of the booklet “Im Park beginnt alles” The “Schlepperei” trial 2014 – A trial on §114 FPG which received special attention A collection of articles Content * Introduction * Chronology of Events * A Letter from Prison * An Overview of What Has Happened During the Court Sessions from […] …read more

By oplatz In their lager a camera was installed in a toilet window , and they closed the toilet. As they protest for having toilet open, come 80 police into the heim and they release the dogs inside the lager. this is … Continue reading → …read more 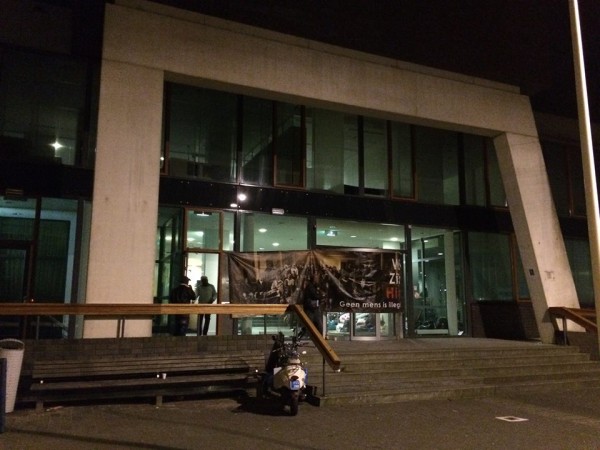 is it ok to buy clomid online

On April 17, 2013, nearly 200 Bangladeshi immigrants working in the strawberry production fields of the Peloponese town of Manolada, in Greece, demanded to be paid the six months outstanding wages that they were owed. In response, their supervisors opened fire on them, injuring 28 people.

The controversies surrounding the Manolada case and it’s judicial proceedings seem to keep unfolding. The Bangladeshi migrant workers have not only been denied any sort of witness protection or financial compensation, they are now expected to pay legal fees related to the case.

The court recently ruled their employer—strawberry trader Nikos Vaggelatos—as well as one of the accused gunmen, Kostas Chaloulos, not guilty. Two of the other supervisors were, however, charged. One for grievous bodily harm and the other for aiding by omission.

During the trial, the legal team defending the workers asked for the president of the Mixed Jury Court of Patras, to be removed from her position. They said the judge’s attitude seemed biased towards the accused throughout the proceedings. Eventually, the judicial council rejected the request and, given that they considered it unfounded, ruled that the migrants should pay the costs incurred.

Concert in the center of Thessalonki, Saturday June 6, 2015

Papers for all immigrants!

Legalize all Refugees with Duldung Status for so many Years and Stop Destroying, Persecuting Refugees in Germany.

By freedomnotfrontex …there is enough reason for the assumption that in future all refugees entering Germany shall be locked up. It is also assumed that the number of deportations will increase enormously. The basic right of asylum and the right to have … Continue reading → …read more

Who are we?
We are a group of refugees who asked for asylum in the Netherlands, but got rejected. We went through a lot in our countries of origin and in our travel to a safe Europe. We told our stories but they are not believed. In order to get asylum we have to come with new proof of our stories, which is either impossible to get or would put our lives even more in danger.

http://psychicevents.uk/home What is our problem?
Since we got rejected as refugees, we do not get any housing but are also not allowed to work. Therefore we are out on the street. We didn’t expect to find ourselves in this situation when we came here as refugees. In fact, we lack all basic human rights.

Where do we stay?
First we stayed in a tent camp, followed by many different squatted buildings, such as Vluchtkerk, Vluchtflat, Vluchtkantoor, Vluchtgarage. However, all places got evicted. But even after all …read more

By consensusdecisionmaking On Sunday night, a man was killed crossing the A16, around the exit for the Eurotunnel. In the last years more and more people are being severely injured and killed on the major highways around Calais as they are being forced to take more and more risks trying to get to England. This death, as […] …read more

By consensusdecisionmaking Today in a large co-ordinated action, the police have closed the squat Galloo, the sudanese jungle by leader price, as well as a large jungle in La Chapelle in Paris, which was home to over 350 people. …read more

By freedomnotfrontex Our beloved Sista Mimi passed away in December last year. She never stopped her political activities or voicing her anger and discontent at this unfair world. The fight goes on and she is still in our thoughts. We wanted to share some … Continue reading → …read more

By freedomnotfrontex The place was still surrounded by the police when our friend Napuli Langa climbed on a big tree and refused to go down for the following four days or almost 100 hours, during which she exposed the shady agreement pushed … Continue reading → …read more

By gepaecktragarz On May 21st, the “International Day without Papers,” migrants, activists and supporters met in Warsaw to protest against the European border policy, and in particular its military wing, the so-called security agency FRONTEX, based in the Polish capital, during its … Continue reading → …read more