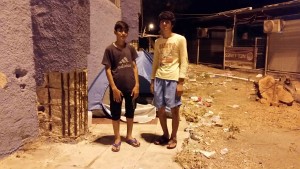 A small Afghan boy is sitting outside a blue tent built up just behind the kiosk in the port of Mytilene. On the other side of the tent there are some other Afghan minors sitting on a blanket on the floor and leaning at the walls of an abandoned swimming hall. It is late in the night. His elder brother has fever. He is climbing out of the tent to join us. The two underage boys from Afghanistan are camping there already since four nights. They arrived to Lesvos together with their mother and father and two little sisters. In Moria they registered themselves as adults, as other people advised them to avoid reporting their real ages for the own good. Then the two of them got released alone.

“We fear to loose track of our family if we move away from here,” F. the elder brother says. “My father said we should wait here for them.” He seems exhausted and under pressure carrying all the responsibility of holding his family together on his small shoulders. With an official note ordering them to leave the country within 30 days, …read more