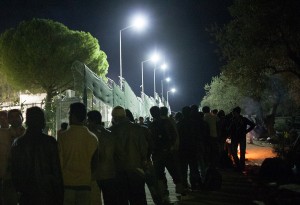 Greek Prime Minister Alexis Tsipras visited Lesbos island on October 6, accompanied by Austrian chancellor Werner Feymann, to ostensibly appraise the refugee crisis on the islands firsthand, but what they saw there did not correspond to the everyday reality as thousands of refugees had left in four unscheduled extra ferries beforehand, the port had been cleaned, bus transportation of refugees from the north of the island to the camps had been halted, suddenly no boats were crossing the sea border just for the time during the short visit and his visit in Moria camp was focused on an inspection of the almost empty First Reception Centre, while in the meanwhile a few meters further inside the fenced territory at the pre-removal detention centre where registration takes place the desperate crowds were repressed by riot police with tear gas and severe beatings.

Hundreds of refugees coming mainly from Afghanistan and Iraq were trying yesterday again to get registered in Moria – often for the third and fourth day. Especially many of the highly vulnerable, such as families with babies and toddlers, handicapped and …read more