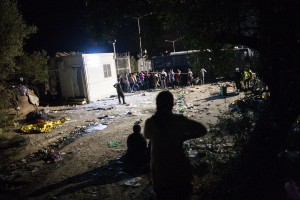 Refugee families queueing in the back of the riot police busses in Moria / copyright: Salinia Stroux

Only two days before his arrival to Greece local authorities suddenly started again using the expedited registration procedures in Moria pre-removal centre for the non-Syrian refugees, which they had applied during the escalation of the refugee crisis in the first 10 days of September, when 30,000 refugees were stuck on the island. The lighter bureaucracy is being used in Moria within the last month with an on off button every time things are getting worse, while in the Syrian camp Kara Tepe registration procedures got eased on a long term basis weeks ago.

During the last week non-Syrian refugees in Moria – among them many children – were suffering once more tear gas attacks and beatings by riot police as they were trying desperately to enter the pre-removal centre for registration. …read more