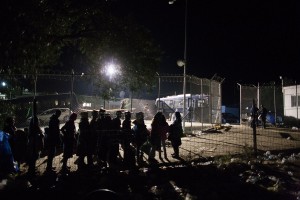 Pilot “Hot Spot” to open located on Lesbos island. Only one day before the visit of UN High Commissioner for Refugees authorities close Kara Tepe camp and move Syrians to Moria camp. Meanwhile Non-Syrian nationalities being registered there already before have been kicked out of the few UNHCR tents.

During talks with Europe’s migration commissioner Dimitris Avramopoulos and Luxembourg Foreign Minister Jean Asselborn, whose country holds the EU presidency, the latter stressed that the EU was ready to provide financial and logistical aid to Athens to help get the Hot Spot centres up and running. The first, he said, would open “within 10 days” on Lesbos, in the eastern Aegean Sea.

The so called “Hot Spots” are planned by the EU in a technocratic way as detention centers where newcomers will be registered, screened and the eligible ones will be distributed to member states. UNHCR, Fronted, EASO and Europol will play mayor roles inside these …read more