The German government has been using the increased number of refugees applicant as a pretext to justify the introduction of strict measure on the Asylum and Residence law. The actual draft violates the Fundamental Human Right of refugees, such as health and medical treatment, and abuse on refugees identity and declaration.

By consensusdecisionmaking 1956, White children paddling in a pond marked by a sign reading “For European Children Only. South Africa ” the discomfort of swimming pool users faced with the presence of migrants at the IcèO , driven by the masses to take these measures. la Voix du Nord 18th November, 2015. Natasha Bourchart has taken the decision the restrict […] …read more

By freedomnotfrontex We are Sudanese refugees and activists who have today decided to occupy our Sudanese embassy in Berlin. This is peaceful, direct political action. We are taking a stand against the Sudanese regime. The Sudanese dictator, Omar Hassan al-Bshir, rose to … Continue reading → …read more

By freedomnotfrontex even if it was your choice to go to the hell, maybe it was the only door open. you try to put flowers and take a cage for a bird to bring life to your cell but the … Continue reading → …read more

By zigacina European’s Unions recent plans to manage the movement of people by slowing the flows at the so called ‘Balkan route‘ is apparently taking its first steps. To not enter the abstract theoretical discussions let us qoute the information posted from … Continue reading → …read more

Tension has gripped the neutral zone between Greece and Rep. of Macedonia since yesterday, as the refugees and migrants there have been informed that only citizens of Syria, Afghanistan and Iraq will be entitled to pass freely from now on.

This morning about 100 Iranians were near the neutral zone and begged to be allowed to cross the border, resulting in the Macedonian authorities closing the border shortly after 8:00 am.

Croatian Minister of Interior Ranko Ostojić confirmed on Thursday, November 19, 2015 that Croatia is closing its borders for economic migrants. Refugees from Iraq, Syria, Palestine and Afghanistan will still be accepted and registered before they continue their journey to Slovenia and further on to their final destination.

This decision comes as a chain reaction since the same measure was implemented last night and early this morning by Serbia and Macedonia. Slovenia has also closed its borders for economic migrants and already tried to send 162 people back to Croatia, all of them coming from countries that are not considered war zones (Morocco, Bangladesh, Sri Lanka and Liberia). Croatia denied the request so those migrants are still in Slovenia.

Rep. of Macedonia has started to place barbed wire along the border with Greece …read more

By consensusdecisionmaking On the 14th of November two hunters were spotted closer to the camp than usual. They were found half concealed inside a hollowed out bush approximately 30 metres away from a part of the camp which is mainly inhabited by families with children. When asked to leave they insisted they were within their legal grounds […] …read more

Eight immigrants drowned and at least another three were missing after their inflatable boat sank off the Greek island of Kos early on Tuesday. Seven people were rescued.

By gepaecktragarz 27.11.2015, Friday, 18.30 h, Maxim Gorki Theatre, Marmorsaal German/Arabic/French below Solidarity is a union or fellowship arising from common responsibilities and/or interests, as between members of a group, classes, etc.: But as political activists – what solidarity mean to us? … Continue reading → …read more

By consensusdecisionmaking Originally posted on Calais Migrant Solidarity:
Today during the early afternoon, several families, mainly consisting of woman and children, were holding a protest against the bad living conditions and the police violence in the jungle. This peaceful family protest was prevented from taking place by very large numbers of CRS. The CRS blocked the peaceful… …read more

By consensusdecisionmaking Today during the early afternoon, several families, mainly consisting of woman and children, were holding a protest against the bad living conditions and the police violence in the jungle. This peaceful family protest was prevented from taking place by very large numbers of CRS. The CRS blocked the peaceful protest at the end of Rue […] …read more

By freedomnotfrontex this is our 10th protocol to form a “lager mobilisation network” in berlin. again, around 20 people were there – thanks to u all. please add, correct and criticize in the comment section. protocol #10 – forming a ‘lager mobilisation … Continue reading → …read more 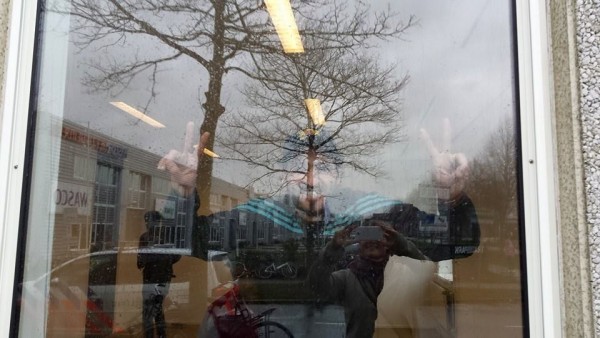 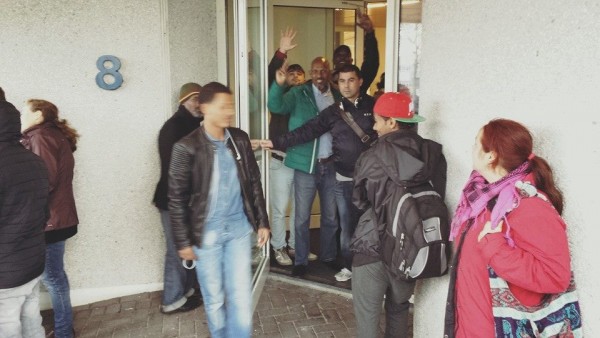 By consensusdecisionmaking Refugees in Calais and Dunkerque held vigils after the attacks in Paris Today at lunchtime the refugees in the jungle held a gathering in front of the Jules-Ferry centre in solidarity with the French people after the terrorist attacks in Paris. Many of those attending the gathering are Syrians and Kurdish people from Kirkuk (Northern […] …read more

By consensusdecisionmaking This is the fire in the Calais jungle last night, 2.500 square meters touched. A fire broke out amongst closely crowded tents at around 00:45am this morning. The cause of the fire is said to be a candle. Fire spread quickly due to the wind and people were running around trying to evacuate the area […] …read more

By consensusdecisionmaking In previous days No Borders activists in Calais have faced a major increase in repression from police and have been falsely accused throughout international media of inciting migrants to riot. As our group has explained in a public statement, accusations that No Borders activists are inciting the riots are unfounded, ridiculous, racist and plainly an […] …read more

Open Meeting in Jena: “For Refugee Safety In Suhl Camp – The place is full of threats and insecurity “

Open Meeting in Jena: “For Refugee Safety In Suhl Camp – The place is full of threats and insecurity “ http://thevoiceforum.org/node/4034

From:: Refugee Protest in front of LaGeSo” >Berlin

By palme43 17.09.2015: Burkina Faso Le Balai Citoyen (der Bürgerbesen) Afrique-Europe-Interact: “African countries should reject the European claim, that the primary aim of the summit in Valletta is to diminish irregular migration, including the readiness to accept or sign comprehensive deportation treaties … Continue reading → …read more

By palme43 Protest in Suhl: Refugee Rescued With His Cat Exposes “Dangerous And Unlivable” Conditions In German Camp http://thevoiceforum.org/node/4025 I fled from the Syria massacre to escape to Turkey. After I decided to move to Germany with my family. I do not … Continue reading → …read more

By beatingborders These two months were characterized by a migrant struggle and frequently crossings by boat or by an ongoing climbing of the fences of Ceuta and Melilla. The Moroccan government, in service of Europe, responds to those crossings with an intense repression in the forests and cities close to the borders and with the deportation of […] …read more

By consensusdecisionmaking This morning the belated, much delayed construction of the ” New Camp began. The work was supposed to begin on the 2nd of November 2015. The associations have stated that this date was missed due to ” communication problems with the people living in the area. Actually, the people have consistenly refused to leave. https://calaismigrantsolidarity.wordpress.com/2015/11/07/update-on-the-forced-removal-in-part-of-the-jungle/ Finally this […] …read more

By consensusdecisionmaking The spokesman of the Ministry of the Interior, Pierre-Henry Brandet, pointed the responsibility of No Borders ‘organisation’ in the clashes that opposed for three nights migrants and police near the Calais “jungle”. He said the activists “are taking advantage of disarray of migrants and lead them to riot.” The prefect of Pas-de-Calais, Fabienne Buccio, had […] …read more