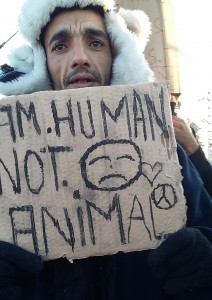 “Do we look like animals or why do they play with our lives?”
A massive police raid in Idomeni put a temporary end to legal border crossings from Greece towards Northern Europe

Hundreds of refugees were transferred by busses to Athens from the border city Idomeni, near FYROM (Former Republic of Macedonia), following a massive police raid with more than 350 officers participating that took place on Wednesday December 9, 2015. Many refugees had been waiting and protesting for more than two weeks along the new 40 kilometers barbed wire fence, while only Syrians, Iraqis and Afghans were allowed to cross since November 19. Around 1,200 refugees from more than 19 nationalities had remained in the provisory tent camp the last days “united”, as they claimed in gratifies for the right to a safe passage. As the border got partly closed and nationalities filtered in the ones allowed to cross and the rest, the situation had escalated with the Macedonian police using rubber bullets, tear gas and other forms of violence against anyone trying to cross. Dozens of refugees started started hunger strikes to protest the discrimination, as few of which even sew their mouths. A young Moroccan died during protests as …read more