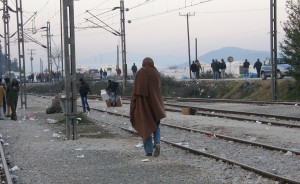 The borders along the Balkan Route are getting every day more militarized and difficult to cross for transit refugees in Greece. Since two months just protection seekers from Syria, Iraq and Afghanistan can pass the greek-macedonian border near Idomeni. Refugees of other nationalities are therefore forced to chose hidden paths and try to go to Northern Europe with the help of smugglers using dangerous routes. Many of them actually get stuck in Greece under inhuman and degrading conditions due to a lack of money to continue their perilous journey. The country is unable to cope with the steady peak in number of arrivals – i.e. last year there were more than 860,000 coming to Greece. According to recent media reports, the EU plans to practically ‘fence’ Greece in order to stop the (safe) passage of refugees. Plans include the threat to kick Greece out of the Sengen Zone if the government doesn’t improve border controls. A closure of the border along the Balkan route would lead without doubt to a massive humanitarian crisis in Greece when thousands of refugees have to stay in limbo in a country without any infrastructure which is itself hit strongly by half a …read more