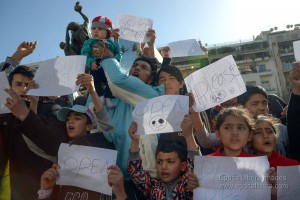 http://entreconpensacola.com/speaker/carolyn-r-ward/ +Currently about 22,000-25,000 refugees trapped in Greece+ Migration Minister Yannis Mouzalas estimates it can become 70,000 within one month if borders don’t open again+In Idomeni and Athens refugees protest daily and demand the opening of the borders*

Protest against closure of border 28. February in Victoria Square

The UN Secretary-general Ban Ki-moon on February 26, 2016 voiced concern about increasing border restrictions in the Balkans and Austria for migrants and refugees streaming towards Europe “calls on all countries to keep their borders open, and to act in a spirit of responsibility sharing and solidarity, including through expanding legal pathways to access asylum,” his spokesman Dujarric said.

The UN High Commissioner for Human Rights, Zeid Ra’ad Al Hussein on Thursday expressed serious concern at security measures adopted at a recent meeting of the heads of police of five European countries.

“In the wake of the adoption of these measures last week, the treatment of refugees and migrants moving through some of these countries already appears to have changed, with seriously negative implications for their human rights,” Zeid said. “Latest reports suggest chain deportations are now taking place all the way down the Balkan land route, which includes Austria, Slovenia, Croatia, Serbia …read more