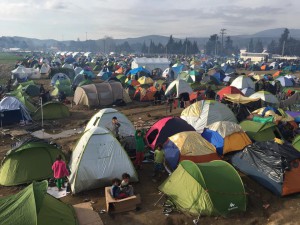 “Like dogs! We are waiting here under unbearable conditions – it is not even suitable for animals!” says a young woman who is enduring since days at the borders of Idomeni. Everywhere around the transit border camp are media representatives from all over the world covering the humanitarian crisis of the last two weeks. It was then when Austria and the Balkan states decided to further reduce the numbers of the refugees who can pass the borders by limiting the eligible nationalities on Iraqis and Syrians. On Monday refugees started a hunger strike after a 13-years-old boy got electroshocked by a cable of a standing train. But is anybody listening out there?

Since the last weekend border police in Macedonia and other Balkan states are pushing refugees back who come from regions which are not considered to be war zones, like i.e. Damascus, Mosul, Rakka. Omar a refugee from Syria is standing infront of the border. He is sleeping with his family in a camp near Idomeni and came by taxi to check the situation. Next to him on the ground some families are sitting in the mud with their babies and …read more