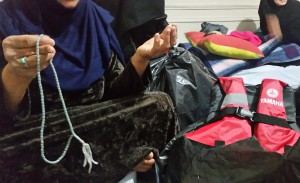 The last few days hundreds of refugees were caught on the Turkish mainland, along the western coast and in Turkish territorial waters while trying to set over to Greece clandestinely. Among the refugees who come mainly from war-torn Syria, Iraq and Afghanistan are more than 30% children. Whilst getting intercepted, sometimes detained or directly send back to Izmir and Istanbul, the authorities take away their life-vests. Many refugees report that the Gendarmes even burned, while telling them that: “We do that so you wouldn’t try again!”

In some occasions refugee dinghies intercepted in the Aegean Sea even were threatened by Turkish coast guards that they would shoot their dinghy if they don’t go back.

Consequently, most refugees when trying again to set over have no money left to buy new life-vests while most of them cannot swim neither.

Refugees will not stop fleeing to Europe despite NATO, Frontex, Coastguards, the usage of Drones, war ships or helicopters to locate, intercept and return them. They will not stop at barbed wire or in front of armed soldiers who are blocking their ways. As long there is war, people will move on, no matter what.

An Afghan father indicates with a movement of his …read more