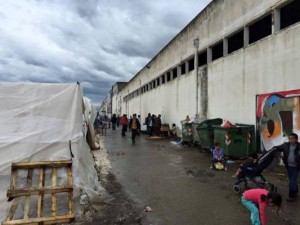 About 400 refugees from Syria and Afghanistan are currently hosted in the tent camp near the former Roca factory in Larissa half of which are children. Now refugees sent a letter demanding for better conditions.

We – Afghans refugees – resided in Pireaus port of Athens city under Mr. Satery’s management. After a few days responsibles of the camp promised us that we would be transfered to a camp in some building in Larissa city which has sanitary facilities like bathrooms, showers and so on but unfortunately, they lied to us. That’s why refugees don’t believe responsibles and top brass of Greece goverment.

Right now this camp which is located near Roka factory doesn’t have any sanitary facilities necessary for living which is hinted in enclosure of this letter. They suggested us to be transfered to a military camp about 12 kilometer far away from Larissa city by the name of Koutsochero, but we didn’t agree to go there because that camp is located very far from the cit,y it is located in a …read more