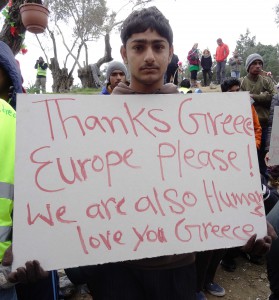 Refugees are stuck the islands of the Aegean as Greek government forbid them moving on to the mainland in order to control the distribution of thousands to different mass camps. Currently more than 4,000 persons are caught up in Piraeus port at different gates in warehouses and tents outside. There is no more space for newcomers. Among the refugees in the port are many who were transferred to new mass camps in the periphery but denied to stay in these nowhere lands and returned.

On Lesbos island nearly 5,000 refugees are waiting to depart and continue their quest for security in Europe. Some of them are already registered and wait inside Moria Hot Spot, others still wait to enter procedures while sleeping in the informal and completely volunteer run tent camp outside of the Hot Spot.

But not all refugees are kicking their heels to complete identification and registration in Moria. People from Morocco, Algeria, Tunesia, Bangladesh and Pakistan have been declared typical migrant nationalities and are detained and readmitted upon arrival. 608 persons were sent back from Greece since the beginning of 2016 based on the Readmission Protocole with Turkey, the majority of which were from …read more