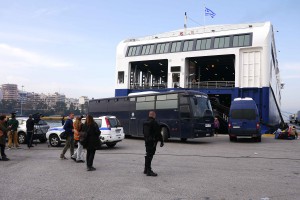 We were traveling with the ferry Blue Star 1 from Mytilene to Piraeus on the 21.3.16.
As we entered the ship at 19.45 o’clock we saw an overcrowded bus entering filled with with sitting and standing persons. Outside media representatives and volunteers where watching the situation.

The bus on which was written EURORIDE on the front right side and which had the plate nr. PAZ1316 stopped inside the ship and we could see from a distance of 1 meter the people running handcuffed two by two up the stairs. We asked how many they are and someone from the crew said 150.

Around an hour later we had the opportunity to offer some water and chips to the detainees and saw that they still were hand cuffed to one another two by two.