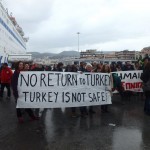 Since the dirty deal between the EU and Turkey was made on 18th of March the situation in Greece worsened rapidly. Safer formal ways through the Balkan-corridor were closed down already before by the European governments while more than 50,000 refugees are caught up inside Greece. More than 90% come from war torn countries such as Syria, Iraq and Afghanistan and the majority are women and children. More than one month after the closure of the border to FYROM / Macedonia they are still under shock by the sudden changes unable even to consider alternatives such as relocation, family reunification or asylum. They cannot realize and accept that this is the new reality they have to confront, with everybody being stuck in limbo under inhuman conditions in refugee tent camps all over Greece. 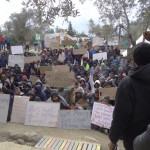 From Monday, 4th of April, on the return agreement with Turkey will be implemented with more than 500 people being readmitted from the Hot Spots on the islands of the Aegean which have been turned into detention and deportation centres in practice. Only the ones applying for asylum or family reunification and unaccompanied minors will not be deported back to Turkey. Asylum …read more