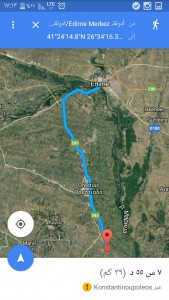 On 4th of April 2016 refugees in Idomeni reported to us a push-back operation they experienced at the Greek-Turkish land-border in February. Among the witnesses are a 63-year-old woman and several families with small children.

In the night from 12th to 13th of February they crossed the land-border coming from Edirne/Turkey, fleeing to Greece. They arrived in Greece around 6am. It was a big group of about 120 refugees, among them many children and also several elderly. After the border-crossing they divided into three groups, each group about 40 persons, because it seemed too difficult to walk with the big group. They hide in a forest until it was dark again. At 8pm they started to walk and they walked until 6am.

The way they had already walked by foot.

After the whole night walking the smaller children were unable to continue. In their group of 40 there were 13 children and also 3 elderly, one of the woman sitting with us is about 63 years old, another couple was much older then her, in their 80ies. In this group all people were refugees from Syria, all Kurds from the region of Qamishli.

At about 6am they found a kind of closed …read more