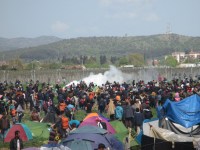 In the last days, the european army stated a clear war against -so called- refugees who wanted to cross the border at Idomeni. This is starting a new era of violance against people who are seeking a safe place to leave and does not even have a chance to apply for asylum.

In a lot of propaganda media it was claimed that the protest of -so called- refugees was organized by european activists. This is another clear Racist statement, as the journalists can not even beleive that these people are able to organize themselves for a protest. The photos below show also how is in reality the great protest and resistance is organized.

What about the “Welcome Culture”? It is hard to see it beyond the smoke and tear gas. it just fade away, as we didn’t realize people doesn’t need clothes and cookies. They need right to stay and right to work…

Without more words, we share with you the photos, taken by A., a photographer and syrian refugee in Idomeni camp who is among the people to get mass-deported to …read more