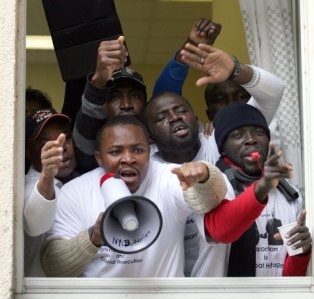 -In Solidarity with Refugee Community Network

European asylum structures and processes ensure that every refugee is criminalized (for some, even before arriving in Europe). This criminalization is promptly and meticulously processed, and is manifested in various forms of societal and institutional discrimination and racism that ends with deportation. Deportation is criminal. It is criminal not only because of the obvious denial of the deportee’s right to freedom of movement and the right to decide his or abode, but also because the physical and financial cost as well as the long-lasting psychological effects are not reckoned with and provided for by the deportation machinery and its advocates. In the worst cases, some die in the process of being deported while others are either dumped in countries where their lives are in danger or where they are actually killed by the forces they initially fled from. For some years now, the German authorities have been dubiously collaborating with foreign Embassies like the Nigerian Embassy in Berlin to issue Travel certificates to nationals from other African countries that are then deported to Nigeria with no guarantee of safety whatsoever. Although this scandal …read more