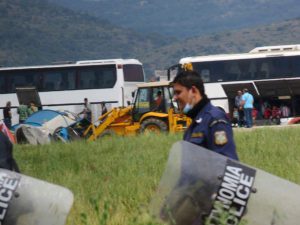 Maybe Idomeni will be emptied. Maybe all will be forced into isolated camps all over Greece. But not only is the soil of Idomeni now full of the stories of resistance.

It is the travellers who will keep this struggle alive and tell the stories to those who will follow. A friend in a very similar situation, stuck in Greece many years before said:

Noone can stop the rain.

For updates on the eviction, follow the Live-Ticker of Moving Europe: