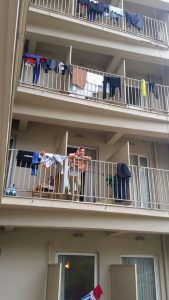 „The City Plaza squat at 78 Acharnon celebrates its first month. The hotel now houses refugee families totalling 385 people, including 180 children. These include 22 single parent families, as well as people with disabilities. The nationalities that make up City Plaza include Afghans, Kurds, Syrians, Palestinians, Iranians, Iraqis and Pakistanis. The families being housed at City Plaza were selected on the basis of their previous “housing” arrangement as well as on the particular problems being faced by each one. Each family lives in a separate room of the hotel, while all inhabitants are provided with breakfast, lunch and dinner, as well as with hygiene products and other essentials. Nearly all are covered through solidarity offerings, while the few purchases that need to be made are financed through donations sourced from within Greece and from abroad.

In a framework of self- organization and coexistence, there are teams for cleaning, cooking, security, education and childcare, medical care, communications, reception, as well as regular assemblies of refugees and solidarians. Initiatives such as that of City Plaza, apart from granting obvious rights and …read more