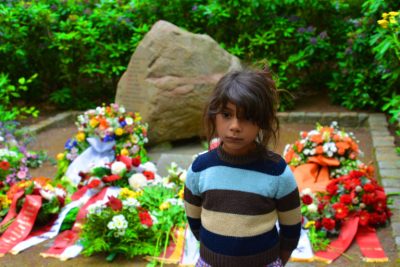 On Sunday, a memorial event marking the 80.anniversary the drag of the Berlin Sinti and Roma in the Nazi forced Marzahn camp, Petra Rosenberg and Hans Coppi found clear words for residence rights for Roma in Germany and solidarity with the Roma families and organizations, who had briefly occupied the memorial to the murdered Sinti and Roma in Europe a few weeks ago. A large group abschiebebedrohter Roma attended the memorial service and part taken at the invitation Petra Rosenberg also the word. Their banners were seen briefly in the Berlin evening show.

Since 22 May, we protest Roma families in Berlin against us impending deportations, for our right to stay and the right to stay for all Roma We are here today to our ancestors, the victims of National socialism were to commemorate. But we’re also here because we and our children still see us after 80 years faced with structural discrimination, social and political exclusion and deportation.
It is high time that the situation of Roma improved. But on the contrary, is the discrimination against Roma not even recognition those so-called Balkan countries in which we lead a dignified life is denied, wurdenvon Germany from 2014 successively fixed price as …read more