Reuters’ article by Aidan Lewis and Steve Scherer: “An armed group is stopping migrant boats from setting off across the Mediterranean from a city west of Tripoli that has been a springboard for people smugglers, causing a sudden drop in departures over the past month, sources in the area said. … Sources in Sabratha, 70 km (45 miles) west of the capital, said the sudden drop had been caused by a new force in the seaside city, which is preventing migrants from leaving, often by locking them up. … The two Sabratha sources said the group was running a detention center for migrants who are turned back or taken from smugglers. One sent a picture of hundreds of migrants sitting in the sand in front of a high wall. … Frontex last week said ‘clashes in Sabratha’ contributed to July’s decline, also citing changeable weather and increased Libyan coastguard presence. The Sabratha sources were not aware of any clashes…..In the past, with no central authority to constrain them, smugglers have adapted and routes have shifted, as already is happening. Last week smugglers moved departures to east of Tripoli, near Al Khoms, Chris Catrambone, co-founder of the Migrant Offshore Aid Station (MOAS) charity, told Reuters. Three large rubber boats set out from the east, he said, while only a small boat with 26 people was found west of Tripoli. ‘The sea was like a lake last week and yet there were few boats,’ Catrambone said. Everyone on the Phoenix, a rescue vessel operated by MOAS, was taken aback because it was so unusual, he said….”  Full text here.

Statements from Save the Children (here) and Sea-Eye (here).

MSF statement (here) – Full text: On 11 August 2017, the Libyan authorities publicly announced the establishment of a search and rescue (SAR) zone and restricted the access to humanitarian vessels into the international waters off the Libyan coasts. Immediately afterwards, the Italian Maritime Rescue Coordination Centre (MRCC) in Rome warned MSF about security risks associated with the threats publicly issued by the Libyan Coast Guard against humanitarian search and rescue (SAR) vessels operating in international waters.

Following these additional restrictions on independent humanitarian assistance and increasing blockade of migrants within Libya, MSF has decided to temporarily suspend the search and rescue activity of its ship, Prudence. The MSF medical support team will still assist the rescue capacity of the SOS Méditerranée-run boat Aquarius, which is currently patrolling in international waters.

“If these declarations are confirmed and the orders are implemented we see two grave consequences – there will be more deaths at sea and more people trapped in Libya,” declared Annemarie Loof, MSF’s operational manager. “If humanitarian ships are pushed out of the Mediterranean, there will be fewer ships in the area to rescue people from drowning. Those who will not drown will be intercepted and brought back to Libya, which we know is a place of lawlessness, arbitrary detention and extreme violence.” These declarations came barely a week after the announcement of the Italian Navy deployment inside Libyan waters aimed at increasing the capacity of Libyan coastguards to intercept migrant and refugees and send them back to Libya.

“The recent developments represent another worrying element of an increasingly hostile environment for lifesaving rescue operations,” said Brice de le Vingne, MSF’s Director of Operations.  “European states and Libyan authorities are jointly implementing a blockade on the ability of people to seek safety. This is an unacceptable assault on people’s lives and dignity.”

MSF requests Libyan authorities to rapidly confirm that they will adhere to and respect the internationally recognised legal obligation to rescue boats in distress, and that they will allow this to take place in international and Libyan waters.  MSF further requests that Libyan authorities clarify that all boats, operated by NGOs or anyone else, will be permitted to conduct these rescue activities unhindered and unharmed and that Libyan and Italian authorities will not interfere with the legally guaranteed right to disembark people in a place of safety.

“MSF refuses to be coopted into a system that aims at all cost to block people from seeking safety,” continues de le Vingne. “We call on the EU and Italian authorities to stop implementing deadly containment strategies that trap people in a country at war with no regard for their protection and assistance needs. Safe and legal pathways for refugees and migrants are urgently needed in order to reduce unnecessary death and suffering.”

can you buy isotretinoin in uk IOM Press Release, 9 August: “Aden – Early this morning (09/08), a human smuggler, in charge of the boat, forced more than 120 Somali and Ethiopian migrants into the pitching sea as they approached the coast of Shabwa, a Yemeni Governorate along the Arabian Sea. The migrants had been hoping to reach countries in the Gulf via war-torn Yemen. Shortly after the tragedy, staff from IOM, the UN Migration Agency, found the shallow graves of 29 migrants on a beach in Shabwa, during a routine patrol. The dead had been buried rapidly by those who survived the smuggler’s deadly actions. IOM is working closely with the International Committee of the Red Cross to ensure appropriate care for the deceased migrants’ remains. … ‘The survivors told our colleagues on the beach that the smuggler pushed them to the sea, when he saw some ‘authority types’ near the coast,’ explained Laurent de Boeck, the IOM Yemen Chief of Mission. ‘They also told us that the smuggler has already returned to Somalia to continue his business and pick up more migrants to bring to Yemen on the same route. This is shocking and inhumane. The suffering of migrants on this migration route is enormous. Too many young people pay smugglers with the false hope of a better future,’ continued de Boeck. Since January 2017 to date, IOM estimates that around 55,000 migrants left the Horn of Africa to come to Yemen…” 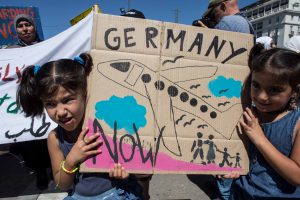 Aurogra 1 mg for sale usa After a protest which took place on August 2nd, 2017 in front of the German Embassy, more and more refugee families are uniting to demand their immediate transfer to Germany. On August 7th they continued their struggle with dozens of families in the Himalaya offices, the only travel agency responsible to issue them tickets and tomorrow, on Thursday 10th of August 2017, they will protest again in front of the Greek Asylum Service in Katekhaki.

About 2,400 refugees are awaiting currently their transfer. Many have spent already more than 1 ½ years under inhuman conditions in Greece and more than two years far from their beloved. Within the last year, German authorities have made a sharp u-turn from the “welcome” culture of 2015, harshening not only national asylum policies and suspending the possibility of family reunion for refugees with subsidiary protection for two years, but also imposing stricter visa policies in general and showing more reluctance to accept family reunifications while slowing down abruptly the transfers of already accepted applicants. In a time when German news speak of a revival of Dublin returns to Greece, the desperate families who got separated by escaping war struggle for their human right to be with their family.

We, the Syrian families from different camps in Greece (i.e. Elaionas, Koutsochero, Ritsona and Skaramangas), who have our beloved relatives in Germany are inviting all refugees who have also their families there and everybody else who wants to join our struggle and stand in solidarity with us, to a peaceful protest on Thursday August 10th at 11 o’clock in front of the offices of the Greek Asylum Service / Dublin Offices near Katekhaki metro station.

We want to express our strong concern and disagreement about the informal agreement between the German and the Greek government, which let to the practice limiting transfers of persons accepted through family reunification to go to Germany to 70 per month.

There are more and more families who have been accepted to go to Germany more than six months ago.
There are grandparents, fathers, mothers and children waiting to join each other after years of separation.
There are elderly, sick, disabled, newborns, victims of torture and other forms of violence or exploitation as well as many other vulnerable persons among us, who are in urgent need of their families.
There are many of us who wait already since more than 1 ½ years under very difficult conditions in Greece.

We have escaped war.
We need our families and a life in peace. 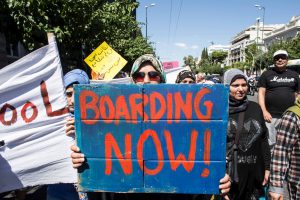 Libyan media reported that the Italian naval ship, Comandante Borsini, (in background of photo) just concluded a five day working visit to Libya at the Tripoli Naval Base which “saw Italian experts and technicians conducting a closeup assessment of the needs of Libya’s naval vessels….. [a Libyan naval spokesman] indicated that the maintenance that is to take place is part of activating the 2008 agreement in the part related to Naval and Coast Guard personnel.” “An Italian service vessel will arrive Tuesday in Tripoli Naval Base to kick off the service work. … [The spokesman] explained that there are no concealed agreements and no articles in the current deal that would violate Libya’s sovereignty, saying the Libyan part of the deal did not ask for any intervention or operations inside the territorial waters….”

Clandestina is now focused in practical solidarity and analysis.
For daily news on migrants struggles you can check the Thessaloniki No Border Camp facebook page:
https://web.facebook.com/NoBorderCampThessaloniki2016/

In the summer of 2016, the Refugee to Refugee Call Center (R2R) was established in Thessaloniki:

You can read more about the trials of the 100 people arrested after the Thessaloniki No Border Camp (and about other similar cases) in the webpage “You can’t evict solidarity” that was created in the autumn of 2016:

You can find a collection of texts presented at the Thessaloniki No Border Camp here: