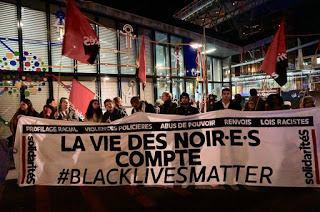 “Last time I was sleeping on a wall next to Ouchy, police on bicycle draw me back from the wall and throw tear gas in my sleeping bag, on my face.”

“They stop me in the street, ask me to come inside their bus, put handcuffs on my hands, they closed its windows in order that nobody could see or hear me, they beat me badly without no reason. After this they brought me to a place I didn’t know and drop me there.”

Each and every one of us could have been victims of their own cases.
We don’t want to wait to know who will be the next one to die in their hands.
Police brutality is increasing against blacks and immigrants.
Police brutality on black people in the streets and in the police stations has to stop, now.
Police have to stop to beat us and to take our money.

We need free movement and the respect of our basic humanity.

We ask the autorithies to let the family and friends see Lamin. We ask that the authorities stop blockinf the access to the investigation. We ask justice for Lamin.

PRESS RELEASE � 29.10.2017 (Lausanne)
Lamin, died in the hands of the police because he was black
He came from Gambia and had left his life there to try building a new
one and getting medical care. It is in a cell of the police center of
Bl�cherette in Lausanne that Lamin died, left alone, on the october
24th. He was 23 years old.
We met Lamin before, we knew he was
sick and he has just left the hospital after undergoing a serious brain
surgery from which he had a visible scar on his skull. The population
office (SPOP-in charge of deportation) was aware of his situation and
knew that Lamine needed regular medical controls and that he was unable
to travel at that time.
Without having committed any crimes,
Lamin was arrested at Lausanne station by border guards, real
��cowboys�� who act in a total opacity and are regularly using force,
undermining the freedom and integrity of people
.
Lamin was
black, considered illegal, despise his inscription in the population
office (SPOP) and the asylum seekers assistance institution (EVAM). He
was part of this ��deportable�� category of people, volontarily isolated
from the rest of the population and victim of police violence on a
daily basis, which is considered as normal�toward � non-white��
individuals.
According to the little informations we have, Lamin
was taken by the police to the emergency services of CHUV (hospital)
after loosing consciousness and, no one in CHUV opposed to his
incarceration back to police station of Blecherette after examination.
It is surprizing, as we all know he was recently hospitalized for
serious health reasons�! Where is the coherence in medical officials who
provided important health care to Lamin and who, at the other hand,
gave a green light for his detention and expulsion�?
His death
gave place to a brief information from the police, picked up by the
medias, but presenting surprizing contradictions and aiming to
criminalize Lamin.
No, Lamin was not just in violation of
foreign law, he was receiving emergency help from the state and was in
possession of the attestation of it, issued by SPOP. He was hosted in a
EVAM center and was then available to the autorities at all times.
No, Lamin was not to be deported to Lucerne Canton. He had been
assigned to Canton of Vaud and registered at the SPOP as his papers
attested.
No, Lamin was not isolated, he had friends here and he
was in contact with some collective organizations fighting for
immigrants rights.
What really happened to Lamin between Sunday and Tuesday�? Too many unspoken words, contradictions, silences around his death.
Is it because � he�was just an illegal immigrant��,�Madam Procuror?
Why did you delay the recognition of the corpe�until Monday without any explanation?
According to today’s statement by the Procuror, the border guards would
have mistaken him with another person, which they had only realized on
Friday�! If that is true, that emphasizes the way police (border guards,
canton police, etc) commits constant negligence, bad treatments and
abuses on black people or ��people without the right paper��, with
serious consquences that can lead to death. Lamin had a document with
him attesting that he had been assigned to Canton of Vaud and was
presenting visible health problem. How could he have been mistaken for
someone to be deported in Lucerne and moreover, how could he not have
bee subjected to any precaution related to his health�!
Clearly
he has not been heard and his individual situation was not considered�:
all this because his words did not hold the same value as any other
citizen who can claim his rights in the eyes of police.
We demand now that the veil be lifted on all those shadows�!
Because everything is incomprehensible and scandalous in his interpellation and in his death.
Because this is really a sadly emblematic case of the treatment
reserved to immigrants in ��irregular situation�� and of the lack of
attention given to them
Because this is showing the absurdity of the criminalization of non-authorized stay
Because the word ��illegal�� is not harmless�: it produces and spreads a
message that this category of people are ��sub-citizens��, without
rights and upon whom the autorities have all rights�!
Because violence against immigrants, and especially against black people, is still invisible, trivialized and without limits..
Because illegal immigrants� life matters. Asylum seekers�s life, rejected on not, matters. Black people life�s matter�!
We demand a public debate on police violence so that the autorities
have to come out from the shadow and impunity in which they operate in a
total indifference.
To say goodbye to Lamin, to show solidarity
with his family and relatives, to show solidarity with every other black
and immigrant people whatever their permit, who have been victims of
police violence�:
We call for protest
(authorized demonstration, anyone can come, no matter ��illegal�� or not)
Wednesday november 1th, 17pm, Place de la Riponne, Lausanne