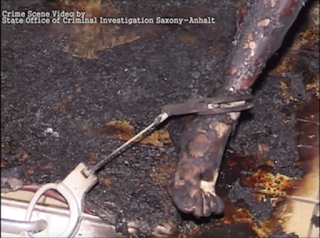 Press Release of PEACE (Peer Exchange of African Communities for Empowerment) Network and The VOICE Refugee Forum Network in Germany to the dramatic stopping of the investigations and 13th memorial anniversary of the murder of our brother OURY JALLOH.

“We stated from the beginning of our calls and campaigns since 2005 that Oury Jalloh was murdered but very few believed us. Now the mainstream talks of murder while we suffer from scars inflicted on us by the state and the society, in the span of 13 years” (Mbolo Yufanyi from The VOICE Refugee Forum and PEACE International)

“Oury Jalloh Struggle Lives On ! – Demonstration on 07.01.2018 in Dessau”
On the 7th of January 2018, it will be 13 years since Oury Jalloh, a brother from Sierra Leone was brutally murdered at the hands of the German police in the city of Dessau, Germany. For 13 years, The VOICE Network and the African/Black Community has stood besides the Initiative in remembrance of Oury Jalloh and supported its call for “TRUTH, JUSTICE and REPARATIONS”, especially to our brother’s family. Almost 13 years have gone and the German state and Police have responded with “LIES, INJUSTICE and continuous BRUTALITY”.
The Chief Attorney Heike Geyer from Halle announced in her press release of 12 October 2017, that she had after careful examination of the available evidence […] “closed the investigation of the death of Oury Jalloh” because allegedly there is not sufficient evidence and new knowledge to his death was not to be expected, since “a multitude of possibilities are conceivable” and consequently a suicide cannot be ruled out.
We should remember that on the day of the murder of OURY JALLOH on January 7, 2005, a hypothesis was already established and documented before the beginning of the crime investigation: “Now I’m going to the basement, where a black African denizen in a detention cell has lit himself.” These were the words of the first investigators from Stendal who later destroyed more that 1 hr of video evidence that they collected from the cell where our brother was murdered.
From the different fire investigations and reports independently organised and sponsored by the Initiative in Remembrance of Oury Jalloh and also following recent reports from National media, it could not have been possible for our brother to commit suicide
The majority of the experts in the fields of fire protection, medicine and chemistry came to the conclusion that the condition of the cell and the body after the fire can not be explained without the use of small amounts of accelerators such as light gasoline, according to Monitor. In addition, the theory of self-burning is as good as to rule out: “Oury Jalloh was at the beginning of fire probably completely incapacitated or even already dead”, quoting Süddeutsche newspaper from 16.11.2017
Following the chronology of the German history especially with respect to Africa in particular but also Europe, we are not surprised of the heinous crime carried out by the German police and covered up by their justice system. There is an African Proverb that says, “When you follow in the path of your father, you learn to walk like him.”
This continuous colonial reality, reflected through organized killing of (to be) Migrants in the Mediterranean, the deportation practices, the investigations against relatives of the victims of NSU or the rise of the AfD and other right-wing entities in Germany and Europe, the criminalization of refugees especially Africans, make it more important than ever for African/Black people to come together to challenge and fight these evils of the 21th Century.
Remembering and fighting for justice for Oury Jalloh, Layé Kondé, Mariama Sarr, Christy Schwundeck, Dominique Kuomadio (the list goes on) and all the others is a matter of self-defense.
The more united we are in challenging and defending ourselves and values against these monsters of the 21th Century, the more we expose the cracks of a world order and systems that have failed us and Humanity in general and will destroy us and Humanity if we do not stop them.
OURY JALLOH IS NOT AN INDIVIDUAL CASE — NO ONE WILL BE FORGOTTEN!
RESPECT OUR EXISTENCE – OR – EXPECT OUR RESISTANCE!
Black Nation Germany: Auf zur Oury Jalloh Demo am 07.01.2018 in Dessau
http://thevoiceforum.org/node/4450
Pressemitteilung des Zentralrates der afrikanischen Gemeinde in Deutschland
Solidarität mit der „Initiative zum Gedenken an Oury Jalloh“ gegen rassistische Bewegungen“
http://thevoiceforum.org/node/4446
Aufruf zur Demo am 07.01.2018 in Dessau
Update on: https://initiativeouryjalloh.wordpress.com/
Our community is the media!
Contact for Reference and inquiry:
Dr. Mbolo Yufanyi
+49 (0) 1708788124.
Reference:
http://www.sueddeutsche.de/politik/tod-von-oury-jalloh-ard-bericht-oury-…
https://www.facebook.com/monitor.wdr/videos/1609164162455851/?fref=mentions
https://www.zhaw.ch/storage/shared/sozialearbeit/News/gutachten-entwickl…
https://vimeo.com/79113052