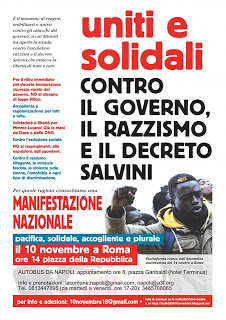 NATIONAL DEMONSTRATION, on NOVEMBER 10th, in ROME – United and in Solidarity against the government, racism and the Salvini decree

It is time to react, mobilize and unite against the attacks of the government (to which previous minister Minniti has paved the way), against the racist escalation and the Salvini decree that attacks the freedom of all and everyone.

• For the immediate withdrawal of the security and immigration decree passed by the government. NO to the Pillon bill about family.

• Reception, welcome, hospitality and regularization for all immigrants and refugees.

• Solidarity and freedom for Mayor Mimmo Lucano! Hands off from the town of Riace and from NGOs.

• No to refoulements, expulsions, evictions.

• Against rampant racism, the fascist threat, violence against women, homophobia and any kind of discrimination.
For these reasons we call for a rally, to march in a a peaceful, supportive, plural NATIONAL DEMONSTRATION, on November 10th , in Rome (Italy)