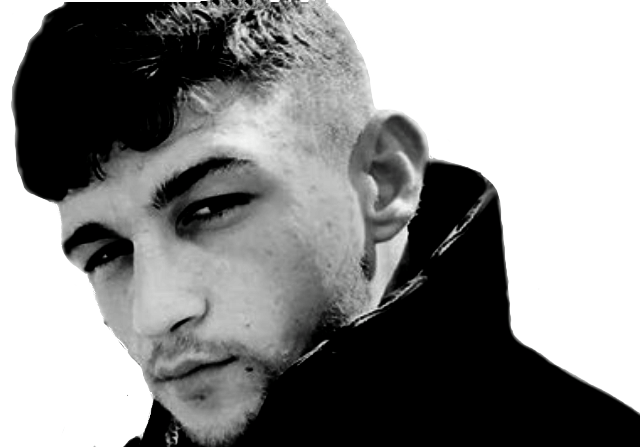 Amed* Ahmad fled from the war in Syria and lived in Geldern, Germany. On 6 July 2018 he was arrested without reason. He was deprived of his freedom for 73 days until he was burned in his cell in the Kleve prison on 17 September 2018 under circumstances as yet unknown. He spent 12 days in hospital. His parents, who live in Bonn, were not notified during this time. They only learned of their son’s death through the media. We cannot forget the death of Amed Ahmad and other victims of racist police brutality. We can no longer silently endure the lies. We do not want a future in which our children are hunted, beaten, insulted or murdered. Racism is not just a police problem, but of a society which has to deal with racist crimes and tolerates and plays down misconduct.

*In the press and public erroneously in the past
uses the spelling “Amad Ahmad” or “Ahmed Amad”.

to the prison in Geldern-Pont. On 10 July 2018 he is transferred to the prison in Kleve. On 17 September 2018 his cell burns down. Amed Ahmad is transported by ambulance to the Saint Anthony Hospital in Kleve. He is not stationed there, but is taken by helicopter to the hospital in Duisburg. One week later, on 24 September 2020, he will be put into an artificial coma and taken to the Bergmannsheil Hospital in Bochum. On 29 September he dies after a lung transplantation. These are the known facts that cannot be discussed.
When, after Amed Ahmad’s death, the public learned of his innocence and the illegal deprivation of liberty, the Minister of the Interior of North Rhine-Westphalia, Mr Reul, promised clarification and apologised to Amed Ahmad’s family members. Attempts at explanation followed and a chain of errors was constructed. However, the case became more and more confused.
Allegedly he would have been arrested because on 6 July 2018 four young women felt threatened by him in broad daylight at the quarry pond. Police officers are not informed by an emergency call, but by the call of one of the young women, the daughter of a policeman, and come to the quarry pond. In the small town of Geldern, the policemen know the young people, probably also Amed Ahmad. In retrospect, the policemen on the investigative committee say they have found similarities to a wanted offender. Therefore they transfer Amed Ahmad from police custody in Geldern to the prison in Geldern-Pont. Although it was established on 10 July that he was not the wanted perpetrator, he still has to remain in prison.
Later it is claimed that he was confused with another wanted person of a different colour, from another country. But since 27 July 2018 at the latest, the police officers in Kleve know that this cannot be the case. A public prosecutor from Braunschweig, entrusted with the case and investigating it, informs the police in Kleve that the person Amed Ahmad is not identical with the wanted person A.G.

So why must Amed Ahmad continue to be in prison? If you try to follow the arguments of the authorities, the investigating officials, the parliamentary investigation committee, and the journalists, none of it makes sense. Especially not because Amed Ahmad’s data was manipulated two days before his arrest. Already on 4 July 2018, two days before his arrest, Amed Ahmad’s data is linked with that of the wanted person A. G. and merged into one data set. Both persons become one person in the police databases, but with two skin colours and two faces. It is still not clear from whom the officer in Siegen received the order to link the data. Her superior was already retired and no longer on duty. Furthermore, on the day before his arrest in Geldern, Amed Ahmad’s data is called up in the police computer several times before one of the young women allegedly called her father, the police officer, for help. Why? Why are the young man’s data first manipulated in the days before his arrest and then called up several times before an alleged call for help is made unofficially. These alleged chains of error can only be classified as chains of error if no other possibilities are allowed. In the case of Oury Jalloh, we had to fight for several years for the facts to be acknowledged and another, probably possible truth to be discussed. However, to this day the official authorities not only refuse to accept this truth, but actively suppress the most probable of all variants, namely the burning of Oury Jalloh with the help of fire accelerators by third parties in police custody. Evidence was destroyed and manipulated. Those who destroyed the evidence, manipulated procedures and deceived the interested public have been promoted and those who sought to shed light have been discredited. So is another version of the events in the case of Amed Ahmad possible?

Is another version alike the murder case of Oury Jalloh or others possible?

Can these questions be asked by officials, politicians, journalists who have not had visible and hidden psychological and physical scars from their previous encounters with racist police officers? We say no, because these questions are not conceivable, just as they were not conceivable in the cases of Oury Jalloh, Achidi John, Laye Alama Konde, Maryama Sarr, Christy Omordion Schwundeck, Halim Dener, Dominique Kouamadio, Dr. Zdravko Nikolov Dimitrov, Hussam Fadl, … and most recently in Essen in the case of Mikael Haile and Adel. But if you ask those who were beaten, insulted or brutally beaten up by police officers in Essen this year alone, then these possibilities can no longer be ruled out.

It is not only since the NSU or NSU2.0 that we have been aware of the cooperation of known right-wing terrorists with police officers. It is not only since NSU2.0 that we know that data is being tapped and manipulated. So why are the data manipulated two days before Amed Ahmad’s death and on the day of his arrest, but before his arrest, the data is accessed several times? Why then are we told that he was arrested for sexual harassment? Then he is deprived of his freedom because he has been confused first with one person and then with another? Here, as in other cases, the official state institutions seem to follow the same pattern as in the Oury Jalloh case and many others: In their investigations, they follow the chain of events with the lowest probability of occurrence and present it to us as chains of error. How far do we have to drill so that, as in the case of Oury Jalloh, we learn all about the truth that is not mentioned in any file or court note?
In what racist quagmire such deeds can happen, we unfortunately do not need to invent, but can observe it every day on the street, in the news and in our neighbourhood. The death of Amed Ahmad and that of Mikael Haile in Essen in the same year or other victims of racist police brutality can only be understood and grasped in the context of racist discourses in society. Such acts can continue to occur because the perpetrators in earlier cases have escaped punishment and receive support up to the highest leadership of their state, be it in Saxony-Anhalt or North Rhine-Westphalia, in covering up the acts.

The criminalization of our being

It was not only on 6 July 2018 that the so-called “welcome culture” of 2015 was transformed into a culture of rejection and agitation. People follow hate preachers and shout: “Push them off!”, “Shoot them at the borders!” or “Dispose of them in Anatolia! The tone has become rougher. Racism is emerging uninhibitedly and racists are daily on the talk shows and chase the bourgeois parties. But these bourgeois parties themselves have previously criminalised different communities one after the other in order to overtake the other racists on the right: police operations in the so-called “Maghreb quarter” in Düsseldorf, incitement against “poverty migrants” from Eastern Europe, suspicion of young men from Afghanistan, … criminalisation of refugees who peacefully fight back in Ellwangen, the use of the word “asylum tourism” for people in need … criminalisation was and is the order of the day. A climate is created in which racist crimes can take place. Crocodile tears are shed after the multiple murders in Hanau and everyone is pointing their index fingers at the AfD, but the same politicians have for years criminalised the shisha bars here in NRW and constructed the term “clan crime”. So who are the arsonists of Hanau?

Our everyday experiences and the determination of our struggles

We ask, would we have experienced fewer chains of error if the Dessau case of Oury Jalloh, Mario Bichtermann and Jürgen Rose had been fully and completely clarified? Would Amed Ahmad now be among us and perhaps tell us about the evening breeze in his homeland? Would Mikael Haile and Adel from Essen be among us? The chains of errors, gaps and lies were not brought to public attention by the German legal system and institutions, but by our resistance and struggles. We asked the questions, challenged society and denounced the system. These questions go through our hearts and minds and as long as the contradictions are not plausibly clarified, we have no choice but to say:

Amed Ahmad, that was murder!

Together we are stronger than the hate preachers and dividers can imagine.

In solidarity we remain united with all those who engage every day for a better world without exploitation, wars, racism, in other words a humane world based on solidarity. That is why we in our region will try, together with all our interested friends, to work for the clarification not only of the death of Amed Ahmad, but also of the deaths of Mikael Haile and Adel from Essen.