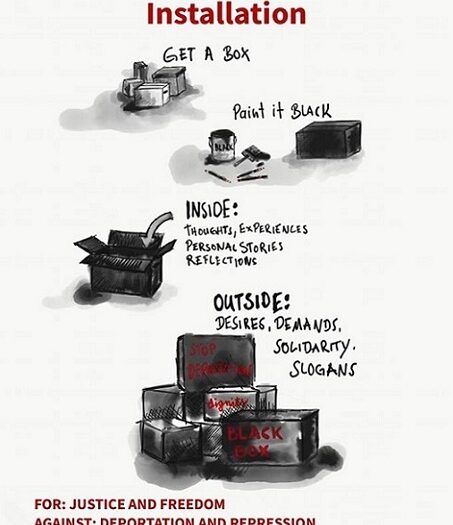 Refugees and Migrants are invited

Dear people; brothers and sisters, activists and friends,
we activists of RefugeeBlackBox and The VOICE Refugee Forum would be happy to invite you to the network meeting and participate in the action of our online community campaign of RefugeeBlackBox. Feel invited to read and join the movement. We remain in solidarity.
RefugeeBlackBox Team

Refugee Black Box is a network of self-organized movement to give refugees a voice and empower us to express ourselves about what we are going through. For example, about the daily struggle of living in this society and in the refugee camps amongst others.

Refugee BlackBox is an instrument to speak out in discussions against the inhumane treatment of refugees and to protest against racism and discrimination. It is about protesting against isolation and deportation. Against this situation of ours, which we see as the continuity of colonial injustice against us and our countries, carried out through economic exploitation and the proxy wars, etc.

Participation or membership is open to all refugees and migrants, regardless of where you are located, if you are willing to actively and politically participate in solidarity for the development of the movement to advance refugee struggle and interests.

Touch One Touch All!

We, RBB activists are like a “family of bees” says Umaru Dahiru of RBBjena, This means promoting our belief in unity, Freedom and Justice, progress and autonomy among refugee communities who are politically transparent and active with us, while supporting each other in and with solidarity. Being an active participant or a principled member of the network is a necessary condition to receive some form of support to empower oneself in the network organization.

The RBB movement is fully independent therefore, activists and participants do not expect any form of financial support from the state and political parties for our activities. We call on progressive people to donate and help support the refugee struggle in our fight against the injustice of racism and discrimination in Germany. We organize ourselves on a daily basis to achieve our goals.

“We are organized as independent and autonomous refugee communities together with migrant communities” by Egunjobi Oladimeji from RBBrudolstadt, to achieve our political goals and break the silence in solidarity with refugees. RBB is beyond self-projection, it is about highlighting the problematic situation and struggles of refugees. The projection of RBB is a political weapon to attract people’s attention to the precarious refugee situation in Germany, for the public to listen to the refugees and communicate with us. We are undoubtedly very grateful for all the people who have listened to us or contributed financially or otherwise to promote our activities.

We invite you to join the RBB movement, help expand solidarity and strengthen our collective political struggles for justice. Join the RBB Online group and learn more about the RBB.

The RefugeeBlackBox solidarity movement is a political platform initiated by The VOICE Refugee Forum in the Caravan for Refugee and Migrant Rights network in Germany to inform and protect the interests of refugees. The aim is to empower and strengthen the self-confidence of refugees as well as to raise their awareness of their physical and psychological oppression and to strengthen the self-organized struggle to overcome the oppression and injustice we live.

We will propose an online Zoom conference to discuss the RefugeeBlackBox campaign for the refugee community in Thuringia and beyond (June / July 2021). In advance of a decentralized online political action of RBB photo exhibitions and solidarity initiatives from different cities. You are invited to organize in your localities and stay in touch with RBBjena. Paint it Black! Produce Your RefugeeblackBox

English: An X-ray of Political Solidarity – on the Background of the RefugeeBlackBox Part 1

For: Justice and Freedom
Against: Deportation and Repression
https://www.facebook.com/RefugeeBlackBox Every day, companies are profiting from the neocolonial and racist migration regime with its borders, surveillance and deportations. The offices and headquarters of such companies can be found right in the heart of Berlin. Nevertheless, barely anyone draws attention to that, while the German government tries to disguise and hide their deportation and weapon deals with these companies. We want to change that!

On 17th of April, we will visit each of their offices in a demonstration against Border and Deportation Profiteers through Berlin-Mitte. Let’s expose and confront them – their dirty business model has to stop now!

On our route, we will publicly shame Thales, Hensoldt, the Association of the German Army, Sopran Steria and all the others that are flying people to death, construct border fences and participate in other sorts of racist business, to then even make money with it.

Abolish borders, abolish Frontex, put an end to deportations, tear down Fortress Europe – freedom of movement for everybody!

THALES: Sells border surveillance systems, including radar for border police. Thales has profited from most borders in the world.

FÖRDERKREIS DEUTSCHES HEER: Lobby organisation for German army with representatives in the parliament and the economic sector.